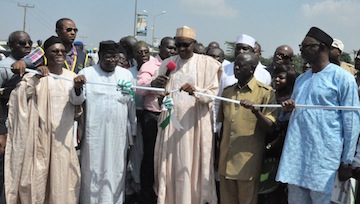 Former Head of State and presidential aspirant of the All Progressives Congress, APC, Major General Muhammadu Buhari (rtd) has commended Governor Adams Oshiomhole of Edo state for the monumental development his administration has brought to Edo state in the last six years.

Buhari gave the commendation on Saturday when he commissioned the newly reconstructed six lane Airport Road and the remodelled Imaguero College, in Benin City which has 18 blocks, a total of 104 classrooms, a large school hall, a chapel, staff rooms, an ICT centre and other standard conveniences.

Visibly thrilled by what he saw, Buhari said, “Let me express my appreciation to the governor for the great work he has done in this state and also to express my delight and congratulate the people of Edo state for the massive support given to Comrade Adams Oshiomhole.

“I am very grateful and I appreciate your success. By setting the idea of infrastructural development and putting the people first in all your policies, till the end of time, the people of Edo state will never forget you, I congratulate you for your ideas and all,” he said.

The APC presidential aspirant also appreciated Benin Monarch, Oba Erediauwa, for the support he has extended to the administration of Comrade Oshiomhole in the last six years, saying the achievements recorded so far in the state would not have been possible but for the royal father’s support.

Earlier, Governor Oshiomhole had at the commissioning of the Airport road, described the road as the flagship of his projects. “We thought that looking at all the projects we have in the state, the Airport road is the flagship. It took the intervention of our paramount traditional ruler, the Oba of Benin, who had to do a letter to the then Speaker of the Edo State House of Assembly, Hon, Zakawanu Garuba at a time when PDP had two-third members of the House.

“They had bluntly refused the budgetary allocation that was provided for in the appropriation of 2009 which provided for the construction of this road along with other roads construction in Benin City. This road was part of the budget I was directed to bring down to Abuja by the leader of PDP who is currently the Chairman of their Board of Trustees, Chief Tony Anenih,” he said.

Oshiomhole continued, “When the chief saw the allocation to Benin Roads, he asked me why should you devote so much resources to Benin Roads? I thought it was an honest question and I attempted an honest reply. I said to him, Sir, given the resource profile of Edo state and all that we need to do, I am convinced that if we are going to make progress with our lean resources, we do not want to spread our thinly resources to everywhere such that we make no impact anywhere.

“Given the crisis in Benin in terms of erosion, we needed to make huge investments on Benin roads and drainage and he said to me, no, reduce the budget on all the roads in Benin City by 50 per cent and redistribute it into recurrent expenditure.

“Whereas our budget was designed to achieve a ratio of 65 for capital and 35 per cent for recurrent but by the time Chief was done, the budget had been revised in favour of recurrent. What was actually left for Airport Road was not enough to mobilise any serious contractor to site. Invariably, the intervention was meant not to construct the Airport road along with all other roads in Benin City”.

“Over time, the ratio of the House changed and APC produced the leadership of the House. We then subsequently re-ordered our budget to reflect the priority of Edo state and this road became one of those flagship projects.

At the commissioning of the Imaguero College, General Buhari hailed Governor Oshiomhole for his red roof revolution and called on the staff and management of the school to put the facilities into proper use.

While thanking Buhari for honouring his invitation to commission the projects, Oshiomhole said: “Your Excellency let me thank you for coming to commission some of our projects. As you can see, we have completely rebuilt this school. This school is a near reflection of schools in Edo state. A school that was once the pride of our people over the years was completely brought down.

“I came here and I saw the dilapidated buildings. No roofs, there were potholes in the classrooms and yet our children were compelled to sit in those classrooms because the school was near-collapse and the teachers were not paid for up to three to four months, education in Edo State collapsed.

“We recognised that the challenge for us was not to lament this decadence in our public schools so we took proactive steps in revolutionising the education system in the state by providing solid structures with modern facilities that meet international standards and what you are witnessing today cuts across the length and breadth of Edo state.

“Today, the Edo Child in public school enjoys free education from the primary to senior secondary school. There is also an extension of free bus ride to all Edo School Child, whether in public or private school as long as they are on school uniform.

“Your Excellency sir, available statistics carried out by the Federal Ministry of Education has it that of all the states in the South-South, Edo state has the least number of students out of school with only seven per cent while some neighboring south south-states has as much as 20 per cent.

Oshiomhole however maintained that Nigeria can and will change for good come 2015 if a man trusted and tested like General Muhammadu Buhari is saddled with the responsibility of governing the country.

Representative of the Oba of Benin at the projects commissioning, the Esogban of Benin, Chief David Edebiri regretted the colossal damage the opposition Peoples Democratic Party did to the state in the past.

He said, “Though we do not play active politics, we are not blind to good things and we want to assure you that we will continue to support your administration.”

He however advised politicians not to heat up the polity and avoid the politics of bitterness and play the game according to the rules.

On the entourage of General Buhari were leaders of the All Progressive Party including Chief Audu Ogbeh, Mallam Nasir el-Rufai, among others.