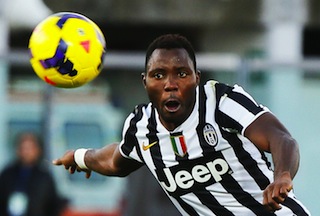 Juventus left-back Kwadwo Asamoah has been ruled out for three months with a knee injury meaning the Ghana international will also miss the upcoming Africa Cup of Nations.

“It will take about three months for Asamoah to recover,” Juventus coach Massimiliano Allegri announced ahead of the Turin derby against Torino on Sunday.

“I regret that I cannot use him but there is still (Patrice) Evra, (Simone) Padoin and (Federico) Mattiello,” added the coach who has guided Juventus to a three-point lead at the top of Serie A.

The 25-year-old Asamoah has been a key player for Ghana but the four-time African champions will have do do without him for the tournament, which is set to take place in Equatorial Guinea from January 17 to February 8.

The Black Stars won the last of their continental titles in 1982 but came closest to adding a fifth in 2010 when they lost the final 1-0 against Egypt in Angola.

Asamoah will undergo surgery on a cartilage problem in his left knee in the upcoming days.