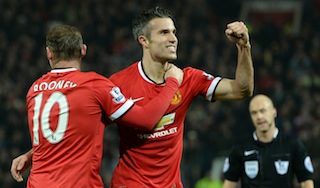 Robin van Persie got back on the scoresheet after a disappointing run as Manchester United strolled to a 3-0 victory over Hull at Old Trafford on Saturday.

And with one defeat in eight games, plus upcoming fixtures against Stoke and Southampton in the next nine days, there is a growing belief at Old Trafford that United can secure a place in next season’s Champions League.

The hosts had the contest completely under control by the interval against a Hull side who have won just once in the league since the opening day of the season and are plummeting down the table at an alarming rate.

After 15 minutes, Rooney’s corner was headed back across goal by two defenders, forcing goalkeeper Allan McGregor into an unconvincing attempt to clear the ball which served only to push it out to Smalling.

The defender’s shot was struck well enough and although it appeared that McGregor might have kept it out, rather than help if over the line, referee Anthony Taylor used goalline technology to confirm the goal.

The second goal followed a half of complete United domination, coming four minutes before the interval as captain Curtis Davis blundered in failing to clear Ander Herrera’s header, tapping the ball directly to van Persie.

The Dutchman laid the ball back to Rooney and he produced a superbly-placed finish from just outside the area, his eighth goal in his last nine games for club and country.

Herrera was on the pitch as a 14th minute sub after a worrying early injury to Angel di Maria who limped off the field clutching his hamstring, a blow to United given his strong start to the game and the recent injury list that has plagued their season.

But that was just about the only concern for United as they dominated opponents managed by their former favourite Steve Bruce, who has yet to beat his old club in 21 tries as manager.

Herrera might have scored after 24 minutes but Davies charged his shot down and into the side netting and a free-flowing move ended with Herrera slipping the ball through for van Persie who was put off slightly by James Chester and could only shoot straight at McGregor.

Hull improved marginally after the interval, and David de Gea was actually required to make his first meaningful save of the match, after 53 minutes, when he comfortably gathered a shot from left-back Andrew Robertson.

There was also a towering set-piece header from Nikica Jelavic which cleared de Gea’s crossbar by some margin, but they barely registered as concerns for the home side.

Van Persie, scorer of just three goals this season for United, was clearly intent on improving that tally and a superb header, from a long Michael Carrick pass, came close after 57 minutes only for the Dutchman to be ruled offside in any case.

He did not have long to wait, however, and after 66 minutes, van Persie added a third for United after more poor defensive play by Hull and a wayward pass intercepted by Herrera.

The United midfielder played the pass through for van Persie who scored via a magnificent left-foot finish from just outside the area.

Meanwhile, United could – and should – have added more with only a brave block from Michael Dawson preventing substitute Radamel Falcao’s close-range shot in stoppage-time.