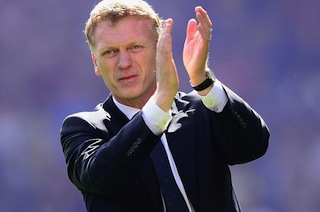 Real Sociedad coach David Moyes said he wants more from his players despite overseeing his first win in charge of the Basque side on his home debut with a 3-0 victory over Elche on Friday.

Former Arsenal winger Carlos Vela was the hero for the hosts as he bagged a hat-trick to register just their third league win in 13 games this season and move them up to 12th in La Liga.

“I am very pleased with the result,” said Moyes, who started his reign with a 0-0 draw at Deportivo la Coruna last weekend.

“I am pleased to have not conceded again, but I am not so happy with the performance. I thought we committed too many errors and I expected us to play better.

“I didn’t think it was easy because Elche caused us problems at the start, but the goals made the difference.

“We had a special talent in Carlos Vela who obviously made the difference and helped the team a lot tonight.”

Moyes is not only targeting improvement on the pitch, but also in the stands at Anoeta as just short of 23,000 fans braved the inclement San Sebastian weather on a Friday night at the 32,000-capacity stadium.

“I thought the crowd were very good in the second half, but I want to give them a team so that there are no empty seats in the stands.

“I want the stadium to be full, I want a team where you can’t get a ticket because it’s a sell-out. At the moment I’ve not got a team like that, but that is what I am going to try to do.”

As well as getting to know his new players and staff, Moyes is also having to slowly adjust to the peculiarities of La Liga and admitted his surprise at the officious showing of referee Carlos Velasco Carballo.

He showed a total of six yellow cards, but Moyes was particularly frustrated with his unwillingness to let the game flow in the opening half hour.

“I thought his tolerance level was too low. I think this is a game for men and it is also a physical contact sport,” added the Scot.

“No one wants to see soft free-kicks. People want to see some challenges to go, so I thought his tolerance level wasn’t right.

“In the Deportivo game I thought the referee was very good, but tonight there were three bookings in 27 minutes. For me it was too easy for him to book players.”