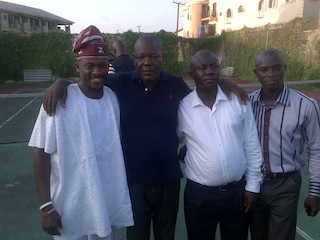 L-R: Obanikoro, one of the returning officers, and Ariyo

Ibrahim Babajide Obanikoro, son of former Minister of State for Defence an governorship aspirant for Lagos on the platform of the Peoples Democratic Party, PDP, in the February 2015 general elections, Musiliu Obanikoro, was Saturday evening declared winner of the party’s primary election for the candidacy of the Lagos State House of Assembly.

Obanikoro polled 18 votes against Muyiwa Ariyo, who got nine votes. The duo battled for the candidacy to represent Eti-Osa Constituency 2 at the House in the forthcoming election.

Announcing the result, one of the returning officers for the election, Raheem Olaide, declared Obanikoro winner in the election that delegates described as free and fair.

An excited Obanikoro told journalists that he was grateful to God and the party for giving him the opportunity.

He also said the peaceful conduct of the election had shown the resolve of the PDP to conduct free and credible elections in all parts of the country.

He also said beginning from Monday, he would start his campaign since he had crossed the first face of the electioneering process.

On his part, Ariyo, who confirmed that the election was peaceful, said Obanikoro had been destined to win.

He also said since the primary election was over, he would work closely with the winner and the party to achieve success at the general elections.