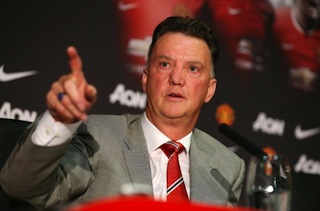 Van Persie had only 13 touches of the ball in United’s 2-1 win against his former club last weekend, three of which were while taking corners, before Van Gaal replaced him with 18-year-old James Wilson for the last 15 minutes.

In the whole of 2014 van Persie has scored only eight goals in 21 Premier League games and United manager van Gaal concedes his fellow Dutchman is stuck in a rut.

“I do think 13 is few for a striker. I want to improve that. You can count his touches on the ball but more important is how he is playing,” van Gaal said.

“It was a very bad game for him. That is why I changed him. When I change a player, it is not because he is the best player on the pitch. You are doing something wrong.”

Asked what van Persie needs to do to get back to his previous standard as one the best strikers in England, van Gaal added: “It is a question of confidence, or maybe scoring a wonderful goal at the right moment.

“You know how strikers are. They have to score goals. They feel like that. It is not that I am asking that.

“I have said they have to be an attacking point and help our team in the third and fourth phase. For me, it is not important who scores. The team has to score.”

Van Gaal, whose side face Hull at Old Trafford on Saturday, also warned van Persie he will have to fight for his place as he prepares to welcome Radamel Falcao back to his squad after injury.

Falcao’s loan spell at Old Trafford has been disrupted by injuries, but van Gaal is hopeful the Colombia forward can feature against Hull.

Asked if Falcao’s return would increase the pressure on Van Persie, van Gaal said: “Every player in my selection has to fight for his position and I shall always take the best of the players and it must also be suitable for the mix of players. So it is also an obligation of a player that he does that.”