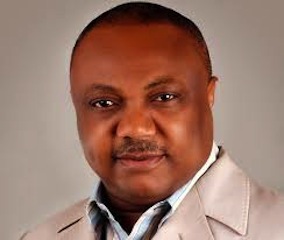 Chief Great Ogboru, a governorship aspirant of the Labour Party (LP) has emerged the party’s flag bearer for the 2015 general elections in Delta.

NAN reports that Ogboru was unanimously voted as the flag bearer at the party’s governorship primaries held on Saturday in Asaba.

According to Okafor, 23 governorship aspirants collected form to contest the position under the party.

“Out of the number, eight returned their forms; three were disqualified, leaving five aspirants to contest the primaries.

“However, four of the contestants later withdrew and had accepted to work with Ogboru as the soul candidate for the primaries of this great party.”

He said that the party had implicit faith that Ogboru would deliver in 2015 and urged the people of the state to support him.

Ogboru, who responded after collecting the LP flag for the governorship race, thanked all who supported him in the struggles in the past and pledged to deliver.

He said that the party was ready to fight again but for the last time to clinch the number one seat in the state in May 29, 2015.

According to him, the battle line has been drawn and there will be a difference in the agitations and struggle to get the power.

“This is the peak of the battle and the last battle that we have to fight; we fought before and we won but they said we did not win.

“The Labour Party does not discriminate but we judge people by the content of their character and this time we are going to labour for victory.

On his part, Mr Fred Obey, Director-General, Ogboru Campaign Organisation, thanked the party and the stakeholders for giving Ogboru the mandate to contest the governorship position in the state.

He promised to work assiduously to win the election in 2015.

Meanwhile, the National Chairman of the party, Abdulkadir Salam, told NAN that the Delta’s primary election was a peculiar one since the party had postponed the exercise nationwide.

He said Ogboru’s victory in Delta would make “great impacts”, especially in the lives of the people at the grassroots level.