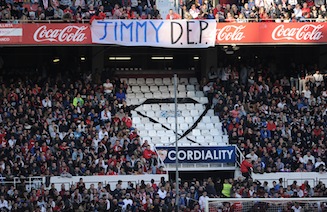 Champions Atletico Madrid went second in La Liga with a 2-0 win over Deportivo la Coruna, but the game was overshadowed by the death of a fan who was pulled from a freezing river following violent clashes between rival supporters.

The 43-year-old Deportivo fan was rescued by firefighters from the Manzanares river near the Vicente Calderon stadium, but died of cardiac arrest shortly afterwards. He also suffered head injuries and hypothermia.

Police confirmed they made 24 arrests after the incidents in which another 11 people, including a police officer, suffered minor injuries.

The Spanish football league said in a statement it had tried to postpone the game at the last minute, but it hadn’t been possible.

Among those arrested were members of the Atletico and Deportivo ultra groups, Frente Atletico and Riazor Blues, as well ultras from the Bukaneros and Alkor Hooligans groups who follow Madrid-based sides Rayo Vallecano and Alcorcon.

Atletico boss Diego Simeone insisted that Spanish society must deal with the problem rather than football clubs alone.

“It is a social problem, not a football one. They are people that live for the shirt, that are fans of a team, but it is a societal problem,” he said.

On the field, Atletico once again relied on their expertise from set-pieces to claim all three points as Saul Niguez headed in from Koke’s free-kick just before half-time.

And Arda Turan’s deflected effort doubled their advantage 10 minutes after the break as Deportivo could only clear a corner to the edge of the area where the Turkish international was lurking.

Victory takes Atletico a point ahead of Barcelona and back to within four points of leaders Real Madrid, but Barca can reclaim second spot when they visit Valencia later on Sunday.

“We cannot expand on the details because we don’t know them and they are under investigation,” said Atletico president Enrique Cerezo when quizzed on the violence.

“I repeat that neither Atletico Madrid nor Deportivo have anything to do with these radical groups that have their own histories and stories.”

Atletico started much the brighter despite the understandably subdued atmosphere at the Vicente Calderon and could have been in front twice in the opening 10 minutes.

Mario Mandzukic scored his first hat-trick for Atletico in the 4-0 mauling of Olympiakos in midweek and was inches away from finding the net again when he headed Koke’s fine cross onto the post.

Two minutes later another delivery from Koke caused havoc as Jose Gimenez nodded his corner towards goal, but Sidnei was on hand to hack the ball off the line.

The visitors were finally punished from a set-piece two minutes before the break as Koke’s in-swinging free-kick was flicked on by Diego Godin and the unmarked Niguez powered home a header at the back post.

Turan then made the game safe with Atletico’s first effort on goal in the second-half as he pounced on a loose ball at the edge of the box and Ivan Cavaleiro inadvertently deflected the ball beyond the helpless Fabricio in the Deportivo goal.

Atletico then took their foot off the gas in the final half-hour, as Diego Simeone replaced Mandzukic and Antoine Griezmann with a third home win in a week assured.

Sevilla climbed above Valencia into fourth thanks to their first win in four league games, 5-1 at home to Granada.

Carlos Bacca opened the scoring midway through the first half when he bundled home from close range, but the visitors levelled through Youssef Al-Arabi from the penalty spot just before the break.

Sevilla weren’t to be denied, though, as Ever Banega slotted home following a goalmouth scramble to register his first goal for the club before Bacca, Stephane M’bia and Kevin Gameiro sealed the three points late on.