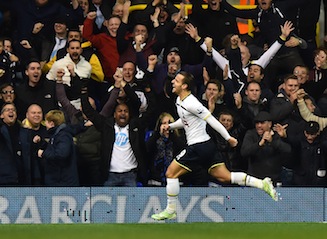 Roberto Soldado’s near six-hour wait for a competitive goal finally came to end as he scored the winner in Tottenham Hotspur’s come-from-behind 2-1 win at home to Everton on Sunday.

Victory at their White Hart Lane ground saw Spurs climb into seventh place, level on points with north London rivals Arsenal, in the Premier League table, and meant they at last enjoyed domestic success after a midweek Europa League fixture.

The result ended Everton’s eight-game unbeaten run but Roberto Martinez’s mid-table side had looked on course to extend that record when Kevin Mirallas’s 15th-minute goal broke the deadlock.

But Mauricio Pochettino’s men were level just six minutes later through Christian Eriksen before former Valencia striker Soldado ended a run of 593 minutes without a goal in competitive football in first-half stoppage-time.

It was just the win Tottenham needed ahead of Wednesday’s trip across London to unbeaten league leaders Chelsea.

Both teams kicked-off having qualified for the knockout stages of the Europa League on Thursday, with Everton dominating the early stages.

Roberto Martinez’s side were rewarded when Mirallas, turning past Soldado, curled an excellent shot into the top corner from the edge of the box.

There was audible frustration among home fans but, fortunately for former Southampton manager Pochettino’s team, an equaliser came soon afterwards to change the mood of the crowd.

The rebound came straight to Eriksen whose shot from a tight angle beat Howard and the covering Gareth Barry.

Sours striker Kane tried his luck from 20 yards while Soldado attempted to get on the end of a poor header from Everton’s Muhamed Besic.

However, Soldado did at last end a goal drought stretching back to September when it seemed Everton would go in at half-time all square at 1-1.

Played in by Aaron Lennon, the Spaniard took a touch and then beat Howard with a composed finish.

Such was Spurs’ fans joy for Soldado, they kept chanting his name until he walked off the pitch for half-time.

Everton might have made it 2-2 in the last 20 minutes when Seamus Coleman was denied by Hugo Lloris, the France goalkeeper moving quickly off his line to block the shot after a good through ball from Ross Barkley.

The Toffees then had a penalty appeal turned down when Romelu Lukaku’s header hit Federico Fazio’s arm while, at the other end, Spurs were denied a spot-kick when Besic tangled with Kane.