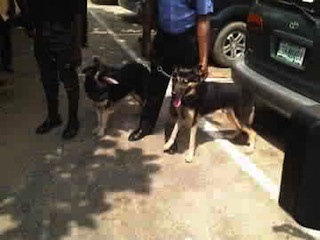 The dogs that attacked the four-year old in police custody

Master Omonigho Abraham, the four-year old boy who sustained extensive injuries to his body, and a life threatening avulsion injuries to his scalp following a vicious attack by two Alsatian dogs has been flown to India for urgent medical treatment.

Little Abraham, who lived with his parents in their rented apartment at 35, Adegboyega Street, Akesan, Igando area of Lagos, Southwest Nigeria on 29 September, 2014, was attacked by dogs. He has been receiving treatment at the Burns and Plastics Unit of the Lagos State University Teaching Hospital (LASUTH) before his father, Mr. Odia Abraham called for his discharge.

But the Lagos State Government said the boy was discharged from hospital against medical advice by his father.

Lawyer to his father, Barrister Goddy Okpamen confirmed that the boy has been flown to India, saying that the boy’s father was able to raise the money through a Non-Governmental Organisation, NGO even when the Delta State Government had indicated intention to take care of the boy.

Okpamen, who did not mention the name of the NGO said he was not sure if the NGO that is footing the bill has links with the Delta State Government.

Lagos State Commissioner for Health, Dr. Jide Idris, while reviewing report of the plastic surgery specialists in LASUTH who attended to Omonigho, stated that the boy’s father took an ill-advised step and chose to take his son out of the hands of the plastic surgery specialists in LASUTH on Friday, 28 November, 2014 after being thoroughly counseled that healthy granulation tissue growing on his son’s skull must not be interrupted.

He said all attempts to talk Mr. Abraham against taking this wrong step were rebuffed by him and that he signed necessary papers to show his desperation.

Idris, while explaining the involvement of the state government in the management of Omonigho’s health, said that the attention of the Lagos State Government particularly the governor was drawn to the case of the boy, who was initially rushed to the Igando General Hospital, where he was stabilized and wounds cleaned by the medical team at the Accidents & Emergency ward of the hospital.

The Commissioner added that Omonigho was thereafter referred to the Burns & Plastics unit of the Lagos State University Teaching Hospital, where Specialists in Plastic Surgery assessed him and promptly began to manage the life threatening avulsion injuries on his scalp which left most of his skull exposed.

The plastic surgery team, he said, placed the boy on intravenous medication, intravenous fluids and daily wound dressing in order to ensure that health granulation tissue can grow and cover the scalp before a skin graft can be successfully performed, stressing that, the definitive management of Omonigho’s type of extensive and deep wounds is a skin graft.

He added that when news of the sad and outrageous event was brought to the notice of the Governor, Babatunde Fashola, he was deeply moved with compassion like everyone else and he directed that young Omonigho Abraham be offered everything that would ensure that he not only survived the injuries, but recovered optimally, so that his opportunity to reach his full potential was not tarnished by the unfortunate accident.

According to the Commissioner, the directive by the governor ensured that Omonigho would receive the best of care at no charge to his parents or family members, adding that Mr. Odia Abraham; Omonigho’s father was thereafter invited to the State Ministry of Health where he received full re-imbursement for expenses he incurred previously in the management of his son’s health.

“He was given full exemption from paying any fees for the management of his son’s health at LASUTH during his stay there and Omonigho while recovering wrote a little “thank you” letter to the Governor,” Idris noted.

He said while the boy was receiving care at LASUTH, he was also visited by the Deputy Governor, Mrs. Adejoke Orelope-Adefulire, who spent time with him and his parents to ensure that they were adequately cared for, stressing that the deputy governor, during her visit found young Omonigho to be clinically stable and doing very well.

Idris noted that while conservative wound management was being done in the Burns and Plastic Ward, in LASUTH, the Lagos State Government set plans in motion to take Omonigho abroad for further management, where all expenses incurred would be covered by the state government, adding that, his parents were informed of every step of the process, and had close and continuous contact with the State Ministry of Health.

“After a thorough search, a suitable hospital was found that would care for the young boy. The chosen facility was the RAK Hospital, Dubai UAE. LASUTH established a communication channel with RAK Hospital and it was determined that Omonigho would require a meshed skin graft coverage of the exposed skull for the next phase of his management. The Governor thus approved the funds for the management of Omonigho, which includes traveling, feeding and accommodation at the RAK Hospital in Dubai, UAE”, the commissioner explained.

He noted that the boy’s father was promptly informed of the plan and was invited to the State Ministry of Health to discuss the details of the approval, travel plans and hospital arrangements, and was thereafter given a letter of approval stating the plans to fly his son abroad and was asked to provide his son’s passport with an accompanying family member in order to process visas and other travel requirements.

“However, Mr. Abraham informed us that a Non-Governmental Organisation from Delta State has made arrangements to fly him and his son for medical treatment at a hospital in India. He was counseled on the benefits of receiving the package offered by the Lagos State Government and was also advised to put forward his decision as soon as possible so that the necessary arrangements can be made to transfer his son and a family member of his choice to Dubai for the treatment,” he said.

The Commissioner noted that Mr. Abraham however, for reasons best known to him chose to take his son out of the hands of the plastic surgery specialists in LASUTH on Friday, 28 November, 2014 against medical advice.

“The surgical team explained to Mr. Abraham that it was pertinent that the healthy granulation tissue growing on his son’s skull through the careful, thorough and expert care of the Plastic Surgery team must not be interrupted as this may cause infections to set in, and slow the healing process, as well as, delay any definitive reconstructive surgery. But Mr. Abraham unfortunately, took the ill-advised step to leave the facility after being thoroughly counseled by the specialist,” he explained.

However, Odia Abraham denounced allegations that the boy was forcefully discharged, saying that everything went smoothly, stating that the NGO responsible, Global Initiative Abuja would visit the Ministry of Health, Lagos State to thank the state government on Tuesday.

“If they were fighting, will they be coming to Lagos, he said, adding that, the NGO moved faster than the Lagos State Government and that a thank you letter had already been written to the Lagos State to thank the governor, the Delta State Governor, Dr. Emmanuel Uduaghan, and the NGO.