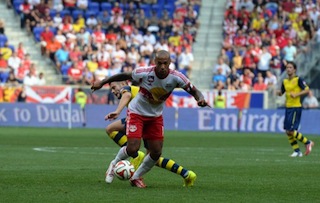 French striker Thierry Henry has played his last game for the New York Red Bulls after four and a half years at the club, he announced on their website on Monday.

“Unfortunately Saturday was my last game for the New York Red Bulls,”, the 37-year-old who is France’s top international scorer said.

“The decision has always been that I would leave after the duration of my contract,” said Henry, who joined the MLS outfit from Barcelona in 2011.

Gerard Houllier, Red Bulls global football director, told France Football in October that Henry would leave the club in December, but that he might continue his career with another team rather than retire.

“I will now take the next few weeks to reflect and decide on the next chapter of my career,” said Henry on Monday.

The former Monaco, Juventus and Arsenal star thanked the club’s fans for supporting him and the side “through the good, the bad and the ugly times in the sun, rain and snow”.

Henry was named an MLS All-Star four times (2011-2014) and most recently led the club to the Conference Championship for the first time since 2008.

“He is truly one of the all-time great talents and will forever hold a special place within the organization’s history. We wish Thierry all the best for his future.”

Henry has won almost everything there is to win in the game including the 1998 World Cup and Euro 2000 with France for whom he played 123 and scored 51 goals.

He has won national titles in France, England and Spain, where he also won the Champions League in 2009.

Originally from the Antilles he joined Monaco at 16, but found his dream home in 1999 with a switch from Juventus to Highbury, where with his former coach Arsene Wenger and compatriots Emmanuel Petit and Patrick Vieira he formed part of a legendary Arsenal side known as the invincables.