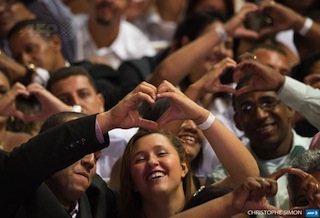 It was Rio’s biggest mass wedding: a total of 1,960 couples who exchanged vows Sunday in a hall next to the famous Maracana stadium.

The big event brought out a whopping 12,000 people, between brides and grooms, friends and family and authorities — including a pack of judges, a Catholic priest and an evangelical Christian pastor.

Dubbed “I Do Day,” the event was sponsored by authorities to encourage many people who might not be able to afford to marry if they had to pay for licenses and banquet halls.

The megacrowd gathered in the venue which is often used for major concerts, couples tied the knot and friends took in a concert by samba star Dudu Nobre.

Guests also got a free ride on local trains — nicknamed the “I Do Day Train” just for the occasion.