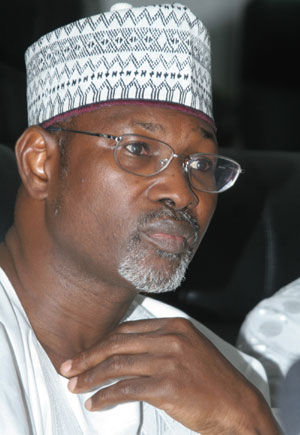 The Lagos State Government says it may sue the Independent National Electoral Commission, INEC, over the fraudulent manner it handled the distribution of the Permanent Voters Card, PVCs, in a deliberate manner to disenfranchise a large number of Lagosians.

The Attorney General and Commissioner for Justice, Ade Ipaye, disclosed this at the weekend, saying that the state government is considering several options against INEC as the people of Lagos had the constitutional right not to be disefranchised.

Ipaye said the action of INEC in the last one month during the distribution of the PVCs and the continuous registration was clearly a breach of the people’s right, urging INEC to remedy the situation or be prepared for redress.

According to him, “we are considering all options. The people of Lagos State have indisputable constitutional right to participate fully in the electoral process. The Independent National Electoral Commission (INEC), on the other hand, has the constitution obligation to facilitate that process. There are no ambiguities.

“What is happening now is clearly a breach for which the law provides redress. We hope that INEC will take very urgent steps to provide satisfactory and convincing remedial measures, failing which we will seek legal redress.”

Ipaye stated that Lagos has the highest population of voters in Nigeria and would not want INEC to deliberately disenfranchise the people, especially when the state was being governed by All Progressives Congress, APC.

“Lagos has the largest voting population than any state in Nigeria and it happens to be in opposition to the ruling party at the federal level. We fear attempts to deliberately disenfranchise a large number of voters here and events thus far are fuelling that fear.

“But we will certainly not be passive or helpless. Lagos is too cosmopolitan and enlightened to be trifled with in this way. I can assure you that we know what to do and when to do it,” he said.

The distribution of the PVCs in Lagos has been marred by controversies as millions of Lagosians are yet to collect their PVCs, with INEC not being able to provide genuine explanation as to what was happening.

Many Lagosians view this move as an attempt by INEC to rig the election in the state by ensuring that many people were disenfranchised by not releasing their PVCs to them.

One of such victims is Governor Babatunde Fashola, his wife, Abimbola and the entire people in the governor’s constituency.

INEC told them that they could not get their PVCs and would have to register afresh as their computer bearing their database has crashed.

The governor, who after arriving at his Ward G3, polling Unit E002, State Junior Secondary School, Surulere, where he had registered with his wife, Dame Abimbola in 2010, did not see any INEC official at the venue at about 2:00 pm.

The governor, after waiting for a long time saw a notice pasted on the entrance of the school, advising residents who had registered at the polling unit to revisit the unit in December for another registration exercise.

The notice placed at the gate informed those who registered at the polling unit, including Fashola and his wife, that they would not get their PVCs as there was no provision for such.

“We regret to inform you that those who registered in this polling unit do not have permanent voters’ cards. Please come back between 3rd and 8th December 2014 for fresh registration,” the notice informed.

Fashola was furious after reading the notice, saying INEC represented the biggest threat to the nation’s democracy.

“We have seen that INEC is the biggest threat to our democracy. They set a date for the distribution of PVC, the state mobilised its residents for the exercise. We put all machinery in place only for the electoral body to change the date of the exercise. They said that the distribution and registration of voters would be done in 11 councils and not the 20 local governments.

“While the 11 had been handled in an unsatisfactory way, now the exercises in nine local governments are not ready. If I, the governor of the state cannot vote, it states what the electoral body had done. They came in the midnight and said that we should all come back and register on  December 3rd, 2014. We registered and voted in that place. And there are evidences to show that,” he said.

According to Fashola, “now, there are questions that must be answered by INEC. Was the PVC for those units which they have cancelled printed? And if yes, who have they given them to?”

He said one could not wipe datas gathered like that, saying he wants INEC to know that he still has his temporary voter’s card and that he expects all those who still have theirs to keep them, adding that “INEC registered us and they cannot deregister us because we are still alive.”

He said if the electoral body could not provide the PVC, it must allow those who had the temporary cards to vote.

“It is disgraceful to say the least. This shows how we organise the affairs of this country. Everything that had happened under Jega’s tenure, it has been characterised by mistakes from his very first election. Promises have been made and broken. It is a disappointment. We will participate in the election whether they like it or not. I feel sad when I visited India and I saw how the country was organising elections for a population more than ours without hitches,” he said.