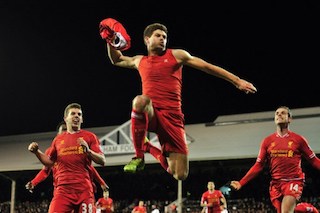 “Firstly in terms of the club the latest is that Steven Gerrard and his representatives have been offered a contract here and at this moment in time that’s where it’s at,” Rodgers said at a news conference ahead of Liverpool’s match away to bottom of the Premier League Leicester on Tuesday.

“It certainly won’t be money,” the Northern Irishman added. “I’ve spoken to him enough times at length and that won’t be the case.

“Between now and the end of the season he deserves the opportunity to think.”

However, in October he said he could leave Anfield if he wasn’t offered a new deal.

“I won’t be retiring this summer,” said Gerrard, whose current contract expires in May.

“I will play beyond this season. We will have to wait and see if that’s at Liverpool or somewhere else. That’s Liverpool’s decision.”

Saturday saw Gerrard dropped to the bench for Liverpool’s 1-0 Premier League win over Stoke at Anfield — a match that took place on the 16th anniversary of his debut for the club.

However, Rodgers was adamant there was nothing more in his decision to put Gerrard among the substitutes than his belief it was now unrealistic to expect the former England captain to play every game.

Gerrard rubbished Sunday reports of a rift with Rodgers by posting a photo of himself and the manger in training on Instagram, together with the message: “Just to set the record straight media talk of a fall out between us 2 is NONSENSE.”

Gerrard came on late against Stoke, with Rodgers deploying Lucas Leiva in the anchor midfield position he usually occupies.

Rodgers’ decision appeared to be vindicated by both a much-needed win and a clean sheet into the bargain.

And the Liverpool manager, asked on Monday if there was a rift between himself and Gerrard, said: “No, 150 percent no.

“If there are two words that describe our relationship it would be honesty and respect. He is arguably the best player to ever play in the Premier League.

“It’s not so much about the number of games he plays now, it’s about the level of the game and that is something we will look at.”

Gerrard, playing as a deep midfielder, nearly led Liverpool to the title last season before they finished runners-up to eventual champions Manchester City.

But with star striker Luis Suarez having left Anfield in pre-season and Daniel Sturridge sidelined through injury since August, Liverpool now find themselves a huge 16 points adrift of leaders Chelsea, and Rodgers said he was contemplating a different role for Gerrard.

“With the players we had up front, his quality could exploit that,” said Rodgers.

“The dynamic up front has changed so I have to think of a restructure so we look at a different type of midfielder to come in.”