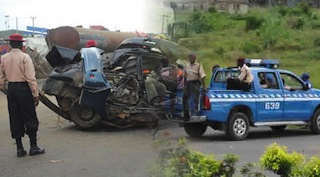 The Federal Road Safety Commission (FRSC) said one person died and 14 others sustained various degrees of injuries in an accident that occurred along the Toll-Gate, Sango-Ota, Ogun, on Monday.

The FRSC Sango-Ota Unit Commander, Mr Omatu Sunday, told NAN in Sango-Ota that the accident occurred at about 9:50 a.m. due to alleged carelessness of a Dangote driver.

He said that the brake of the Dangote trailer that was heading to Lagos failed and ran into four vehicles which resulted in the death of a conductor in a commercial bus while 14 others sustained various degrees of injuries.

The commander attributed the cause of the accident to speed and carelessness by the Dangote driver.

“The conductor died while 14 other occupants of the commercial bus sustained various degrees of injuries,” he said.