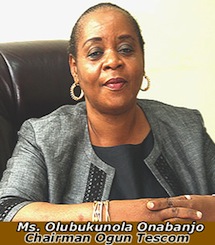 Chairman of the Ogun State Teaching Service Commission, TESCOM, Barrister Olivia Olubukunola Onabanjo has resigned, she tendered her letter to the Secretary to the state government, Taiwo Adeoluwa yesterday.

Aunty Bukky,as fondly called by her admirers is one of the children of the first civilian governor of Ogun State, Chief Victor Olabisi Onabanjo.

Onabanjo confirmed her resignation yesterday after a ceremony in Abeokuta where she was honoured by the All Nigeria Confederation of Principals of Secondary Schools, ANCOPSS, Ogun State chapter.

“Yes, I have submitted my resignation letter immediately after the State Congress meeting of the ANCOPSS yesterday. It was submitted to the Secretary to the State Government,SSG,Barr. Taiwo Adeoluwa around noon,” the former TESCOM boss confirmed.

She declined to give reason for her resignation, declaring that, “I just stated therein that I’m no more working with the governor and no more no less,” she posited.

There are speculations that the politician may be joining forces with the Social Democratic Party, SDP.

She, however, declined to speak on her political future. Many former aides of Governor Amosun have joined the SDP, being promoted by the former governor of the State,Chief Olusegun Osoba.

One of the commissioners in the State Local Government Service Commission, Abayomi Semako Hunye at the weekend defected to the SDP alongside his followers.

The former Deputy Chief of Staff to the governor, Alhaji Shuaib Salisu, who is aspiring for the Ogun Central Senatorial seat under the platform of the APC may also have dumped the APC for the SDP.

Senator Bode Mustapha, another aspirant for the Ogun Central Senatorial ticket is also set to dump the party to join the SDP. Mustapha was a former National Auditor of the Peoples Democratic Party, before he joined the APC last year.

Meanwhile, the much expected State House of Assembly primaries of the All Progressive Congress,APC slated for today across the nation may run into hitches in Ogun state as aspirants are poised for a showdown over alleged imposition of candidates on them.

Governor Amosun had a crisis meeting overnight with leaders and elders from various local government areas in the State to quell the resentment over the alleged plan to impose candidates.

An inside source confirmed to our correspondent that some local government councils have decided to vote against the ‘imposed’candidate’s of the party today.

The source listed some of the areas as; Ijebu Ode, Ipokia, Ijebu North 1 and 2, Sagamu 1 and 2, Ewekoro, Ifo 1, Odogbolu, Ijebu North East and Ijebu Waterside.

It was gathered that Amosun has in the last one week become the chief Solicitor for the Deputy Speaker, Tola Banjo, pleading with rival aspirants and the people of Ijebu Ode to give him another chance.

Two aspirants are also contesting the seat with the Deputy Speaker in the House. They are Sulaiman Tunde Kuku and Aare Kemi Oduwole.

Storm is also brewing over Governor Amosun’s choice of a female aspirant for Ipokia local council. A similar crisis is also surfacing in Ogun Waterside.

An aspirant for the House in Ogun waterside, Comrade Femi Olunuga, a.k.a CFO has reportedly dumped the party for the SDP over what he described as injustice meted out to him by the leaders and the governor over the choice of candidate to represent the area.