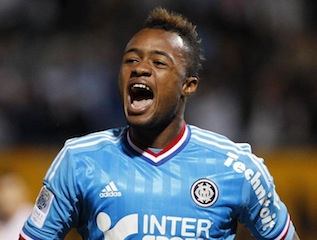 Lorient’s Ghana international Jordan Ayew scored a penalty to cancel out Dimitri Payet’s opener and salvage a 1-1 draw against his former club Marseille on Tuesday.

In an attempt to end a run of three successive defeats on the road Marseille coach Marcelo Bielsa opted for a five-man defence.

Up front, Andre-Pierre Gignac had an off night, missing all his chances, including a lob attempt in the 24th minute.

In the 71st minute, he struck the ball at a virtually empty Lorient goalmouth, only for his shot to be aimed at Vincent Le Goff – the only defender guarding the goalline.

Marseille were struggling to create much real danger, aside from in the 32nd minute when Payet out-foxed Lorient keeper Benjamin Lecomte to put the south coast visitors in the lead.

Bielsa’s gamble after the hour mark when he introduced Michy Batshuayi for Abdelaziz Barrada failed to pay off.

Marseille, according to Bielsa, deserved to have come away with all three points.

“The difference between the two sides wasn’t reflected in the result, so there’s a sense of dissatisfaction,” said the Argentinian.

“We had enough opportunities but lacked efficiency,” he added.

Also on Tuesday, Toulouse saw off hosts Nantes 2-1, while Monaco welcomed Lens in the late game.

Paris Saint-Germain can take over at the Ligue 1 summit on Wednesday with success at Lille, although they will have to do so without their absent star striker Zlatan Ibrahimahic.