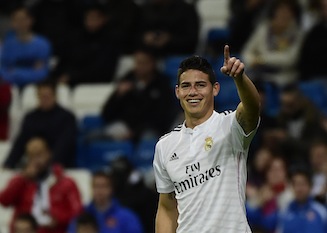 Real may have been without Cristiano Ronaldo or Gareth Bale but Carlo Ancelotti’s youthful side barely made a false move to notch up their 17th consecutive win in all competitions.

Real almost got off to a rocky start when in the 14th minute Alvaro Arbeloa, captain for the night, gave away a penalty.

One of Real’s ‘galacticos’ on duty, Rodriguez, opened the scoring two minutes later with a deft lob, Isco adding the second and Rodriguez adding a third before the break.

This was the 21-year-old Spaniard’s first competitive match after eight months out with an injured knee.

Real’s perfect night at the Bernabeu earned them the first ticket to the Last 16 of a competition they are seeking to win for the 20th time.