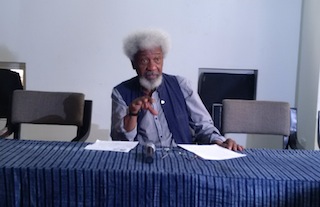 Nobel laureate,  Prof Wole Soyinka, on Tuesday blasted President Goodluck Jonathan for endorsing and encouraging the reign of  impunity in Nigeria even as the country grapples with difficult times.

Addressing journalists on the state of the nation at the Freedom Park in Lagos titled King Nebuchadnezzar – The Reign of Impunity,  Soyinka chronicled Jonathan’s abuse of power and described him as totally alienated from the reality that has engulfed the nation.

“That a national leader should go campaigning on the platform of ethnic support at a time when priorities dictate a united national engagement for survival, is a grotesque undertaking,” Soyinka said, referring to Jonathan’s visit at the Obafemi Awolowo University last week while Boko Haram is wreaking havoc in northern Nigeria.

Jonathan has continued to degrade the political system by endorsing lawlessness and supporting lawless appointees, not minding the chaos Nigeria is going through, Soyinka said.

“Nothing is more unworthy of leadership than to degrade the system by which one attains fulfilment, and this is what the nation has witnessed time and time again in various parts of the nation, the recent affront against the legislative chamber being only the most blatant and unconscionable,” Soyinka said.

Soyinka also did not spare the Inspector General of Police, Suleiman Abba, saying Abba has declared war on Nigeria and is undermining the democratic structure in Nigeria with his recent illegal actions and utterances.

“The latest action of the supposed guardians of law against the nation’s lawgivers is an unambiguous declaration of war against the people,” Soyinka said, adding that “such a public servant deserves to be publicly pilloried, tried and meted a punishment that is appropriate to treasonable acts.”

Abba, Soyinka said, “has wasted no time in inaugurating a season of brutish power,” but Nigerians have a choice to either submit or resist.

“Let’s not beat around the bush: the line has been drawn. The people must decide – whether to submit or resist,” Soyinka said.

For Abba, Soyinka said:  “What sticks to this policeman is worse than shame, it is infamy.”

He said governance has degenerated to such a level that “any individual, on account of his uniform, can stop an elected representative of a people.”

Soyinka cautioned the media not to describe legislators who had to scale the fence of the National Assembly to perform their legislative duties as shameful, rather the police should bear the shame.

“The act of scaling the gates and walls to fulfil their duty by the people must be set down as their finest hour. They must be applauded, not derided,” Soyinka said.

He added: “ If shame belongs somewhere, it belongs to the Inspector-General of Police and his slavish adherence to conspiratorial, illegal and unconstitutional instructions.”