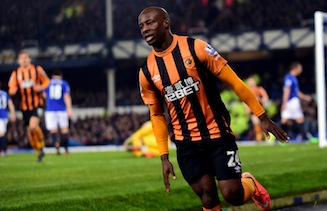 Everton’s hopes of rebounding from their defeat to Tottenham on Sunday were frustrated on Wednesday as Nigerian international Sone Aluko’s fine second-half goal secured a 1-1 draw for Premier League strugglers Hull at Goodison Park.

The hosts looked as if they would get back on the winning track when they took the lead through Romelu Lukaku in the first-half but Aluko’s goal was enough to gain last season’s FA Cup finalists a welcome point, having lost their last four league games.

With just one win all season, they remain deep in trouble fourth from bottom, only out of the bottom three by virtue of a better goal difference over Burnley.

Everton are mired in mid-table mediocrity, in 11th spot, six points off the relegation places and seven adrift of Manchester United who occupy the fourth and last Champions League place.

Everton dominated the opening half and veteran midfielder Leon Osman deserved better for his inspired backheel in the 33rd minute but he was denied by Allan McGregor.

However, a minute later McGregor was powerless to prevent Lukaku scoring.

The 21-year-old Belgian star tucked the ball away with a delightful shot, after being set up by compatriot Kevin Mirallas, for his sixth goal of the season.

The hosts should have gone in 2-0 up at the break but Muhamed Besic’s cheeky curling effort from the edge of the area went just the wrong side of the post.

However, Hull came out fired up in the second-half and Aluko deservedly levelled the match with a super strike after he had shown veteran French defender Sylvain Distin a clean set of heels.

The visitors went close to making it 2-1 minutes later as former Everton striker Nikica Jelavic beat Gareth Barry to a header but his effort went just wide of the post with goalkeeper Tim Howard rooted to the spot.