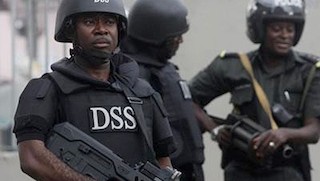 The All Progressives Congress (APC) has described as the height of lawlessness and an orchestrated provocation the second raid that was carried out on the party’s data centre in Ikeja, Lagos, by the DSS on Monday night, saying the out-of-control agency must urgently be called to order.

In a statement issued by the party’s in Abuja on Tuesday by its National Publicity Secretary, Alhaji Lai Mohammed. “The raid by over 40 armed DSS officers, despite a court order restraining the service from such action, shows that the DSS considers itself to be above the laws of the land, and this is totally condemnable,”

“Even under a PDP government that has nothing but contempt for constitutional order, the lack of respect for a court order by an institution of state like the DSS has plumbed the depth of anomie, and shows that our democracy is in clear and present danger from anarchists,” it said

APC said the 40 armed DSS officers, who came with trucks, shoved the security personnel at the building aside and broke into the storage facility from where they carted away over 30 bags filled with the APC membership registration forms.

The party said the raid came on the same day it challenged the DSS to make public its findings after the first raid that was widely condemned within and outside Nigeria, and described as the worst political scandal in the nation’s history.

“It is sensible to conclude that the DSS’ second raid was its own crude reaction to the challenge we posed to it. Apparently yet to find any evidence of PVC cloning as alleged by the DSS, it is now quite desperate to manufacture evidence to justify its raids. Or how else does one explain the claim by the service that its ‘findings’ will shock Nigerians, even at a time it is still in search of evidence? Is this how self-respecting intelligence agencies conduct their operations?

“It is curious that an institution of state will continue to act like an enforcement arm of the ruling party by constantly harassing the opposition. It is strange that an organization that should be deploying its best staff to gather useful intelligence that can help the nation to win the anti-terrorism war is instead engaging in terrorizing the opposition.

“It is time to call the DSS to order, and to remind those at the helms of affairs that while they may be having a free rein today, they will one day rue their actions at this critical time in our nation’s history,” it said.

APC said it is particularly alarming that the DSS carried out its raid despite the Nov. 26th 2014 order by Justice Mohammed Nasir Yenusa of the Federal High Court in Lagos, restraining the DSS from further sealing off the data centre or taking further steps in connection with the property.

The party said the moment Nigerians can no longer seek redress in court, just because the law enforcement agencies have elevated themselves above the law, the country can as well bid good goodbye to constitutional order.

It blamed the prevailing atmosphere of lawlessness in the country on the culture of impunity that has become institutionalized under the government of President Goodluck Jonathan, wondering whether that is the legacy the President wants to leave after his tenure.