Cosby sued over alleged sex assault on girl of 15 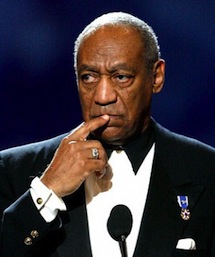 Bill Cosby: accused of rape by over 20 women

Television legend Bill Cosby, already facing a barrage of sex abuse and rape allegations, is now being sued by a woman who claims he sexually assaulted her at the Playboy mansion when she was 15.

Judy Huth, now 55, sued the comedian on Tuesday in Los Angeles Superior Court claiming sexual battery and infliction of emotional distress. She says that she at 15 and a friend, then 16, met Cosby on a film set and that he invited them to meet at a tennis club the following week.

When they did, the suit alleges, Cosby served the girls alcoholic beverages and they all played billiards.

“Under the terms of Cosby’s game, plaintiff was required to consume a beer every time Cosby won a game,” the suit claims. After the two girls had “multiple alcoholic beverages,” Cosby allegedly told them he had a surprise for them “and led them to another house which turned out to be the Playboy Mansion.”

In a room there, Cosby allegedly “proceeded to sexually molest her by attempting to put his hand down her pants, and then taking her hand in his hand and performing a sex act on himself without her consent,” the suit charges.

Huth alleges that she has sustained “psychological damage and mental anguish” throughout her life, but only recently discovered the problems were “caused by the sexual abuse perpetrated by Cosby.”

Around 20 women have now accused the 77-year-old Emmy and Golden Globe winner of sexual assault and even rape, most from decades ago during Cosby’s heyday.

The actor, known for playing a doting father on the popular “Cosby Show” in the 1980s and 1990s, has come under fire in recent weeks over claims made by many women.

“The new, never-before-heard claims from women who have come forward in the past two weeks with unsubstantiated, fantastical stories about things they say occurred 30, 40 or even 50 years ago have escalated far past the point of absurdity,” his lawyer Martin Singer said in a statement last week.