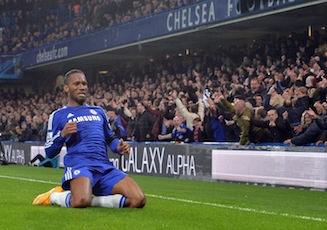 Didier Drogba ensured Chelsea maintained their lead at the top of the Premier League and extended their dominance over Tottenham with a 3-0 win against their London rivals on Wednesday.

Drogba set up Eden Hazard’s opener and scored the second himself before Loic Remy sealed the rout as Jose Mourinho’s side cruised to a victory that kept them six points ahead of second-placed Manchester City.

Chelsea are now unbeaten in 21 matches in all competitions thanks to a vintage performance from Ivory Coast striker Drogba, who rolled back the years to prove the perfect stand-in for suspended leading scorer Diego Costa.

Mauricio Pochettino is the 15th Tottenham manager to make an unsuccessful attempt to get a win at Stamford Bridge since Gary Lineker gave Terry Venables’ side their last success there in February 1990.

The dismal barren run stretches to 28 matches and has been going on for so long that Mourinho was still a PE teacher back home in Portugal when Spurs last won at the Bridge.

Mourinho has insisted there is no chance of Chelsea emulating Arsenal’s 2003-04 ‘Invincibles’ by going unbeaten through the entire league campaign.

But the ruthless way they punished Tottenham’s frailties emphasised why they are firm favourites to win the title for the first time since 2010.

The Blues had failed to score for the first time this season in their goalless draw at Sunderland on Saturday and, with Tottenham having won their last three matches, the north Londoners made the short trip across the capital with what proved to be false hopes of an historic victory.

They started brightly and when Jan Vertonghen looped a header over there was a damaging side-effect for Chelsea as Gary Cahill suffered a head injury challenging for the ball.

Cahill was able to continue after treatment, but the Chelsea centre-back looked extremely unsettled in the ensuing minutes and Tottenham almost took advantage.

Aaron Lennon whipped over a teasing cross and, with Gary Cahill misjudging the flight of the ball, Harry Kane had room to guide a powerful header against the crossbar.

Moments later, Cahill allowed himself to be caught in possession by Kane on the halfway line and the Tottenham striker surged towards goal before driving his shot just past the far post.

But, just as Pochettino’s team were beginning to feel this could be the night they finally got the better of Chelsea, the hosts stepped up a gear and left Spurs trailing in their wake.

In the 19th minute, Branislav Ivanovic sprayed a long pass out to Hazard on the left and the Belgian cut inside before clipping a pass to Drogba.

The Ivorian laid a perfect return ball into Hazard’s path and he fired a low strike under Tottenham goalkeeper Hugh Lloris.

If Lloris must have been a little disappointed to be beaten at his near post, the Frenchman was really kicking himself when Mourinho’s men struck again three minutes later.

Lloris was guilty of a careless and costly mistake as he scuffed a woeful clearance to Hazard, who quickly moved possession on to Oscar.

With the Spurs defence backing off, Oscar picked out Drogba’s run with an astute pass and the 36-year-old easily muscled his way past Vertonghen before calmly shooting past Lloris for the fifth goal of his second spell with the Blues.

Cahill came off at half-time, with Kurt Zouma on for the wounded England international, but there was no cause for alarm as Chelsea strolled through the second half.

Drogba departed to a standing ovation in the 67th minute and his replacement Remy wrapped up the points six minutes later.

The French striker showed tremendous strength and pace to beat Vertonghen to a through ball and his clever flick set up space for a clinical strike past Lloris.