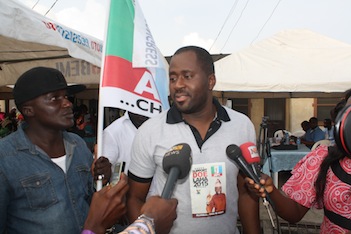 Chief Henry Ajomale, Chairman, Lagos State Chapter of the All Progressives Congress (APC), on Tuesday said the party’s State House of Assembly primaries were concluded in 39 out of the 40 constituencies.

Ajomale told newsmen in Ikeja that the election did not hold in Kosofe Constituency 2.

He said that primary election would hold in the area today 3 December.

“The exercise was a huge success. Out of the 40 constituencies where the primary was held, 39 were cleared.

“It is only one we have problem with out of 40, but today we will conduct primary at the constituency,” he said.

He advised aspirants who lost to accept defeat in good faith.

Ajomale commended security operatives, saying the exercise wouldn’t have been a success without them.

“I commend the security operatives, they did a good job, they were able to keep touts at bay,” he said.

He also commended party members for being orderly and peaceful during the exercise.

The primaries, which started in some constituencies before noon, were peaceful in several areas monitored.

For five members of the Lagos State House of Assembly, their aspiration to return to the Assembly on the platform of the All Progressives Congress (APC) hit the rock on Tuesday, when they were defeated in the primary organised by the party to pick its state Assembly candidates.

In Surulere Constituency 01, the incumbent, Kabiru Lawal was said to have stepped down for Nollywood Actor, Desmond Elliot.

In the case of Edet, she was beaten by Ladi Ajomale, son of the state chairman of APC, Henry Oladele Ajomale.

It was a landslide victory as Ajomale’s son polled a whopping 250 votes; Moroof Ojoola polled mere 58 votes while Edet could only muster a paltry 37 votes.

The story was more pathetic for Omisore.

He could only muster four (4) delegate votes.

The ticket in the Ifako-Ijaye Constituency 2 was won by newcomer Rasheed Makinde who polled 103 votes to push former chairman of Ojokoro Local Council Development Area (LCDA), Olabinjo to the second place with 93 votes.

There was a stalemate in Kosofe Constituency 2 and a rerun has been for tomorrow, Wednesday, 3rd December, 2014.

In Oshodi Isolo Constituency 1, where the incumbent is not running, former Executive Secretary of Agege Local Government, Stephen Ogundipe won the primary.