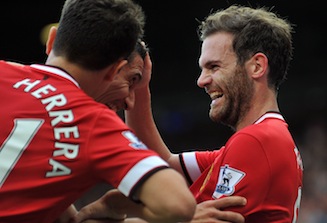 A visiting team managed by former United favourite Mark Hughes equalised through Steven Nzonzi, but Mata’s second-half free-kick, which crept into the net from wide on the right, gave Louis van Gaal’s side victory.

In a furious finale, Stoke might have levelled on two occasions deep in injury time.

First, a Bojan Krkic free-kick was flicked to the far post, where former United reserve Mame Biram Diouf connected with a diving header that was superbly saved by David de Gea.

Soon after, the Spanish goalkeeper made an equally impressive stop to deny Marko Arnautovic, with Ashley Young clearing off the United line after Diouf looked certain to score from the rebound.

Victory tightened United’s grip on fourth place and took them to within one point of third-place Southampton and two-points of second-place Manchester City, both of whom play on Wednesday.

Hughes had been angered in the early stages of the game when he claimed that home winger Young had deliberately caught his full-back Phil Bardsley in the face with an errant elbow.

The former United striker was even more incensed moments later when his goalkeeper Asmir Begovic miscued a clearance directly to Robin van Persie, who was lurking just inside the Stoke area.

Fortunately for Hughes, and Begovic, the Dutch striker squared for Ander Herrera, whose shot cleared the crossbar by some distance.

United, without injured duo Wayne Rooney and Angel di Maria, took time to get into their stride, but after some promising flourishes, they went ahead in the 21st minute.

The move started when the impressive Mata found Herrera on the left and the former Athletic Bilbao man atoned for his earlier miss with a perfect, hanging cross that Fellaini headed in at the far post.

Yet Stoke, as Hughes had promised, were not overawed by their visit to Old Trafford.

They threatened an equaliser on the half-hour when Erik Pieters’s left-wing cross was just missed by Stephen Ireland at the near post and hit Bojan before flying away from goal.

However, if that was a warning, it was one that United failed to heed. Stoke levelled in the 39th minute after Fellaini was dispossessed by Oussama Assaidi in midfield and fell to the ground clutching his neck.

Stoke played on and the ball was collected by Bojan, whose darting run into the United area was stopped by the heel of Chris Smalling.

But the ball broke kindly for Nzonzi, who struck a magnificent, first-time shot past the dive of De Gea and into the bottom right corner of the United goal.

With teenager James Wilson energetic in attack, United made a strong start to the second period.

Pieters, who had been outjumped by Fellaini for United’s opener, saw his difficult evening continue on 59 minutes when he received a caution for a blatant body-check that halted Antonio Valencia’s progress.

Greater punishment was to follow from the resulting free-kick. Mata expertly guided a cross towards the far post and with Marcos Rojo’s leap distracting Begovic, the ball curled into the net.

Fellaini squandered another chance, failing to make telling contact with a Herrera cross, and Old Trafford almost erupted when popular youngster Wilson burst half the length of the field, only to shoot wide with the goal at his mercy.

As Stoke pressed for a second equaliser, there were gaps to exploit. Van Persie almost did just that when he slipped a pass wide to Fellaini, who, again, failed to hit the target.

Fortunately for the Belgian, De Gea’s excellence at the other end meant that his profligacy went unpunished.