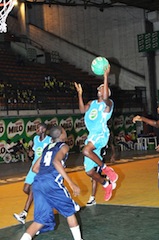 The hardworking, dedicated and disciplined Bayelsa side defeated Government Secondary School Gboko 24-19 to pull through to the semi-final. Team Coach Tony Nelson, who was piloting affairs from the bench all through the proceedings, praised his girls for playing to instructions.

“I asked my players to take it easy and played their normal game without underrating the opponent,” he said. According to Coach Nelson, the team prepared well for the Nestle Milo Championship. He recalled that the Benue side his girls beat stopped them at the 2011 Final. St. Jude’s Girls Secondary School Bayelsa won the Nestle Milo Secondary Schools Basketball Championships in 2012 and 2013.

Also Yejide Girls Grammar School in the second game of the day silenced Government Secondary School Numan Adamawa State 36-15 points. The Ibadan, Oyo state flagbearers who were more promising and coordinated used the game to test all their players. Coach Yemi Abiodun said he used the encounter to ensure that all his players had a feel of the championship.

“I observed many lapses on the opponents side and decided to give all my players the opportunity to play and the the score line 36-15 tells the story better,” he said. Team captain Maryann Adebayo said  the semi-final will be another great match.

“We were relaxed in this match but we can’t afford to take chances in the semi-final,’ said Adebayo.

Coach Timisin Dickson of Government Girls Secondary School Numan Adamawa State blamed his team’s loss on poor preparation. “How can we do well with only two days preparation for such a big championship?” said Coach Dickson who agreed that his team lost to the better side.