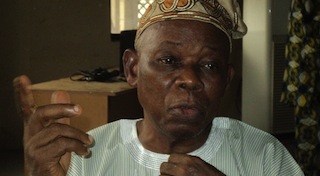 The Lagos East Senatorial Leader of the All Progressives Congress, APC, Chief Abiodun Sunmola, escaped death on Wednesday morning as he was beaten up by youths from the Kosofe area of Lagos State, western Nigeria, in a continued escalation of violence that followed the party’s primary election for the state House of Assembly in the area.

Sunmola had visited the Ikosi-Isheri Local Council Development Area venue of the re-scheduled primaries which could not hold on Tuesday as it was marred by violence, but met the youths who wanted him to explain his presence in at the venue since he was not from the area.

His attempts to assuage the youths and explain that he only came to the venue to see the situation of things fell on deaf ears as they manhandled him, dragged and then beat him up after wetting his body with water.

Witnesses at the scene told P.M. NEWS that on sighting the elderly leader, the youths, some of them delegates for the exercise, confronted him to know his mission after which they started beating him chanting ‘thief’.

“It took the quick intervention of men of the Nigerian Police to save the party leader,” one of the witnesses said.

The development attracted more people to the scene and led to increased police presence at the entrance into the venue leading some of the delegates to scale fences into the venue while some of those who scaled through the fence were arrested.

P.M. NEWS confirms that the tension led the police to teargas the area while shooting in the air to scare youths who had began to throw bottles and stones into the venue of the exercise.

Currently, the police have mounted an Armoured Personnel Carrier at the gate of the local government, with over 15 police pick-up vans stationed in various area while they cordoned off the entire IKosi Road where the council is located.
The primary election for Kosofe Constituency 2 by the party is for the Majority Leader of the House, Dr. Ajibayo Adeyeye, who is seeking re-election on the platform of the party, and nine other aspirants including Tunde Buraimoh, Mrs. Yetunde Arobieke, Olojo Kosoko, Adebayo Adetunji Abiodun, Mrs. Joko Dawodu Omotola, Moshood Owolowo, Daramola Michael Kolawole, and Shonuga Charles Tokunboh.

The venue was relocated from Agboyi-Ketu Local Council Development Area as youths loyal to some of the aspirants went uncontrollable and engaged in a free-for-all.

Reacting to the development, former chairman of Kosofe Local Government and a candidate in the election, Tunde Buraimoh, described the development as unfortunate.

He said he was ashamed that it was only in the constituency that the election could not hold as scheduled while advising all delegates and aspirants not to cause any further problems in the area.

Dr. Adeyeye, who is also an aspirant in the election, expressed surprise at the development and appealed to leaders in the constituency not to be desperate about their support for anyone of them, but allow for a peaceful election.

Another aspirant Ogunleye Oluwole, pleaded with leaders and stakeholders in the constituency to give peace a chance and allow things to follow its natural course.

Former chairman of Ikosi-Isheri LCDA, Kunle Soname, to allow the people to pick their preferred aspirant.