Technology Is Our Hope, Say Nigerians With Disabilities 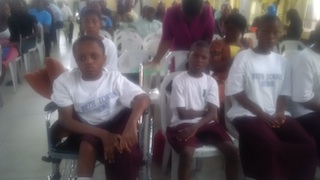 Some persons with disabilities in Lagos. Photo: Simon Ateba.

Technology represents hope and unlimited possibilities for persons with disabilities, it was said on Wednesday, as Nigerians came together to celebrate the International Day for people living with disabilities. ‎‎

The United Nations Day for persons with disabilities is celebrated every year on 3 December and in Lagos, the event was organised by the Lagos State Office for Disabilities Affairs, LASODA.

The theme for ‎the year 2014 , “Sustainable Development: The Promise of Technology “, could not have come at a better time because technology can be used as a tool to break barriers and forge an inclusive and more equal society, said Mrs. Tolulope Animashaun, Chairperson, Governing Board of LASODA.

Animashaun said the day (3 December) is important as it reminds everyone of the progress made so far and the challenges ahead.

She said Lagos,  the first state to enact the Special People’s Law to champion the cause of people living with disabilities, has made tremendous progress but more still needs to be done, especially in the area of awareness creation.

The private sector for instance, she added, needs to be brought in and should go beyond corporate social responsibility which often looks like charity.

She described technology for people with disabilities as a tool of implementation and possibilities.

“Technology provides hope for sustainability of the SDGs,” Akinola said.

She said Nigeria cannot meet its Millennium Development Goals because it has failed to include people with disabilities in almost all its policy formulations.

According to Dr. Segun Oshiyimika, Permanent Secretary, Office of Youth and Social Development of the Lagos State Government, the celebration is necessary because people with disabilities represent “a sizeable chunk of the world population”.

“Recognising them is important as we cannot afford to neglect such a huge number of people vis-a-vis‎ Nigeria’s population.

But even as the country celebrated the achievements made so far, especially in Lagos, elsewhere the situation looked gloomier.

Only about four to five out of 36 states have passed the Special People’s Law and in  Lagos where the law was passed in 2011, LASODA only got their office this year, two years after it was officially set up by the government in 2012.

Nigeria still does not have a national law for people with disabilities and this is a shame, said Adebowale Ademiluyi, a physically challenged person.

He said what Nigeria has achieved for persons with disabilities is “grossly inadequate” and implementation is also a problem.

To Oshilim Constance, some progress has been made in Lagos, but there is need for a more inclusive society.

Nigeria, she said, should empower the physically challenged, passed laws that will protect them and create jobs for those who are graduates.

According to Vweta Chadwick, Global Programmes Director, ASHA Initiative, ‎the government has not fully explored the use of technology towards promoting the social inclusion of people with disabilities.

She gave the example of the use of tablets and other technological tools that can be used to promote literacy for people with disabilities.

The government should empower people with disabilities and create and enabling environment for them.

As she spoke, many people with disabilities, especially those on wheelchairs struggled to access the ‎Adeyemi Bero Auditorium where the gathering took place because it was not accessible to them.

While some people on wheelchairs had to be carried others had to ride in the planks provided to make their movement easier and the shame less obvious.