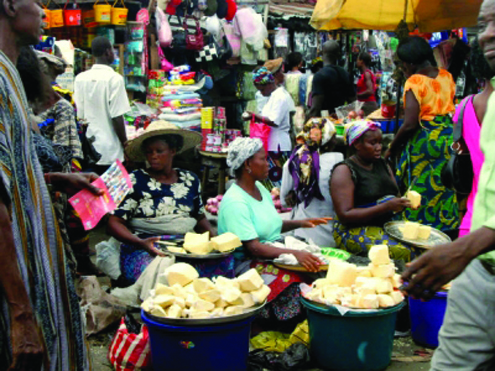 Ahead of the yuletide celebrations, prices of clothes and food commodities in most markets and sales outlets in Makurdi are already on the increase.

A survey of the News Agency of Nigeria (NAN) in Makurdi showed that the prices of baby wears and ladies shoes went up by at least 30 percent compared to their previous prices same time last year.

The investigations also showed that fresh tomatoes, cooking oil, rice and tubers were affected by the price increase.

Similarly, a basket of pepper which sold for N550 increased to about N600 and N630 while a basket of onions previously sold for N500 went up to N600.

The survey also showed that a bag of oranges increased from N3,000 to N4,000, while beauty products also had marginal increment of N500 on them.

A cross section of the traders revealed that several factors were responsible for the price increases.

Mr. Duben Onyia, a dealer in children wears attributed the price increase to bad roads, insecurity and increase in the demand on the products.

“The roads are worsened and insecurity and scarcity contribute.

“Civil servants used their November salaries to shop for kids for the yuletide, which also makes the prices to soar.

However, Mrs. Stella Ordue, a member of Market Women Association, Makurdi complained of low patronage, blaming the situation on non circulation of money due to politics.

Another trader, Terna Kartyo, said bad roads and the hike of the transportation of goods to the markets were reasons for the increase in prices.

At the Railway Market, there was relative stability in prices of commodities but traders generally complained of low sales.

Mrs. Patricia Tsegba , a dealer in frozen foods, attributed the poor sales to the state of the economy, especially the insecurity and power supply.

“Insecurity and power supply are major issues in the country.

“Even though we have not increased prices, patronage is still very low, a carton of frozen chicken still sells between N7,500 and N8, 500.”

A meat seller, Idris Hassan, attributed the hike in prices of food items to transportation problems.

Mrs. Msuur Tyough, a hair dresser said it had been observed that ladies now make expensive and long lasting hair to avoid the last minute rush.

“At the beginning of each first day of December, prices of hairstyles usually go up, such as braids, fixing of Kinkin and other weave-ons,” she said.

The survey also showed that the prices of home decorations and kitchen utensils remained unchanged.

Meanwhile, a consumer, Mrs. Erdoo Iber, has appealed to the state government to re-introduce the price control system, to regulate prices, especially during festive seasons.