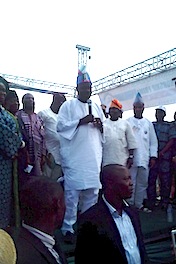 Three thousand, eight hundred and sixty-one delegates of the Ogun state chapter of the All Progressives Congress (APC) on Thursday voted to elect the incumbent governor of the state, Ibikunle Amosun as the governorship candidate of the party in the 2015 general election.

The primaries which took place at the open space of the June 12 Cultural Centre, Kuto, Abeokuta saw the governor emerge sole candidate of the party in the state.

The governorship primary, which was held under heavy security presence, was also duly supervised by both the state and national representatives of the Independent National Electoral Commission (INEC) led by Mr Kehinde Mustapha.

The result of the votes was later announced by the Chairman Electoral Committee from the headquarters, Alhaji Abass Bello, who declared that of the 3, 570 votes cast, 16 votes were void while 3,554 votes were okay. “This is the highest landslide vote, therefore I declare that Senator Ibikunle Amosun return as winner to contest the governorship election on the platform of our great party, APC in 2015.”

Addressing the party faithfuls and delegates shortly after he was declared winner, the governor described the exercise as a peaceful one, adding that, “it was a call on him to do more for the people of the state.

“What happened today is a demonstration to what APC stands for, we must abide by the rule of the game which says that primaries must be conducted. It is a call for further service to the people of Ogun who have given me the mandate to continue the service that we have been rendering to the people of Ogun.

“No one person can do it alone, it will take collective responsibility of us all, it will require the support you have been giving to us and we will not take it for granted but will continue to serve you better.

“We will continue to serve you diligently, it is a covenant between us and the good people of Ogun state. Today, you have challenged me that, though, we have been working, you want us to continue to do more.

“What we have done today is the first step, the next is the general elections, we must all continue to work together for our great party to come out victorious at the poll. By the special grace of God, we will again meet here on 1 March 2015 when I will be reading my victory speech after we might have won the election,” Amosun posited.

When our correspondent asked him to react to the news that his deputy, Prince Segun Adesegun, who also declared his intention to contest the governorship seat on the platform of Social Democratic Party (SDP) few hours before the conclusion of the votes, Amosun said, “it was one of the beauties of democracy which should be encouraged.

He, however disclosed that he wishes his deputy and other candidates from other political parties well in their desire to contest against him in the forthcoming governorship election in Ogun, assuring that the ruling party, All Progressives Congress, APC will still emerge as the winner after the election, hinting that, the state was known for peace and harmony, urging politicians in the state to play the game according to the rule.

Adesegun has been at loggerhead with the governor, which had made him to defect alongside other chieftains of the party including Chief Olusegun Osoba to the Social Democratic Party, SDP.

The Ago-Iwoye born politician today declared his intention to run for the number one seat in the state. He also announced at the event attended in Abeokuta by mammoth crowd that the former first lady of the state and wife of his former boss, Chief (Mrs) Aderinsola Osoba will be his running mate.