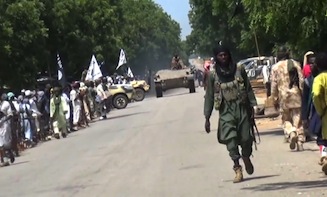 Over 150 people, including 38 police, were killed in a dawn raid by Boko Haram on the northeast Nigerian city of Damaturu this week, emergency services said on Wednesday.

The violence on Monday saw intense fighting on the streets of the Yobe state capital and coincided with a double female suicide bombing in the main city of neighbouring Borno state, Maiduguri.

Both states have been at the epicentre of the militants’ five-year insurgency but the attacks were another sign of rising violence as the group tries to carve out a separate Islamic state.

Boko Haram was meanwhile said to have launched two separate attacks in Borno in the wake of the failed Damaturu raid, which saw the authorities impose a 24-hour curfew.

The attack in Konduga left scores of militants dead, according to a military source and a civilian vigilante, while one resident said many civilians were feared killed in the town of Lassa.

But there was no independent corroboration of the death tolls in either incident.

During the lockdown, rescue workers brought 115 bodies, all of them dressed in civilian clothing, to the Sani Abacha Specialist Hospital, a medical source said.

It was not clear whether they were all non-combatants but among them were two medical doctors and a staff member of the federal polytechnic and his two children, he added.

Civilian vigilantes operating in Damaturu claimed on Monday that more than 40 Boko Haram gunmen had been killed in the fighting.

A senior rescue official also confirmed the death toll and both said that six soldiers were also killed while Nigeria’s federal police said 38 police officers had lost their lives.

Most of the police killed were at the mobile police base in the Gujba Road area of the city, said force spokesman Emmanuel Ojukwu.

One local man, Umar Sada, said at the time that the gunmen, who stormed the city at about 4:45 am (0345 GMT) on Monday, burnt down the police barracks.

“Rescue teams are still looking in the bush around the city for more bodies. It’s believed that people might have died from gunshot wounds while trying to flee,” said the hospital worker.

Monday’s raid came just hours before two female suicide bombers attacked a market in Maiduguri, less than a week after two other women hit the same location, killing more than 45.

Maiduguri, where Boko Haram was founded in 2002, has been on high alert ever since last Tuesday.

The latest attacks followed an increasingly bloody pattern of mass casualty strikes, including one on Friday in which at least 120 were killed at the central mosque in the northern city of Kano.

The violence has prompted renewed concern about the government’s ability to put down the rebellion and protect civilians, as well as whether elections will hold next February.

Politicians in the northeast — an opposition stronghold — fear that tens of thousands of people could be disenfranchised because of the insecurity, which could compromise the overall result.

Analysts say the Kano mosque attack was in response to a recent call by Muslim leader the Emir of Kano for civilians to arm themselves for protection against Boko Haram.

The country’s top Islamic body the JNI, which speaks for Nigeria’s leading cleric the Sultan of Sokoto, has also urged people in the Muslim-majority north to defend themselves.

A military source in Maiduguri and a civilian vigilante both confirmed the attack in Konduga and said it was a likely reprisal for the failed Damaturu raid.

Konduga, 35 kilometres (20 miles) from Maiduguri, has been attacked repeatedly in recent months but has a high military presence.

Musa Yohanna, who fled Lassa on Tuesday to the Adamawa state capital of Yola, said the attack on his town followed a previous unsuccessful raid on Saturday.