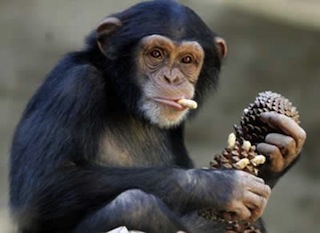 Chimpanzees are not entitled to the same rights as people, a New York state appeals court ruled Thursday, thwarting an advocacy group’s attempt to get primates freed from captivity.

The Nonhuman Rights Project said it was already pursuing an appeal at New York state’s highest court in a bid to move four privately-owned chimpanzees to a sanctuary.

The group argued in court in October that chimps have such similar characteristics to humans that they should be recognized as “legal persons” and given the right to liberty.

But a panel of appeal judges in the state capital Albany on Thursday declined to enlarge the common-law definition of “person.”

“A chimpanzee is not a ‘person’ entitled to the rights and protections afforded by the writ of habeas corpus,” the judges wrote.

“Unlike human beings, chimpanzees cannot bear any legal duties, submit to societal responsibilities or be held legally accountable for their actions,” they continued.

“It is this incapability to bear any legal responsibilities and societal duties that renders it inappropriate to confer upon chimpanzees the legal rights… that have been afforded to human beings.”

The Nonhuman Rights Project says it is the first time anyone has ever sought a writ of habeas corpus applied to an animal.

“The court ignores the fact that the common law is supposed to change in light of new scientific discoveries, changing experiences and changing ideas of what is right or wrong,” it said.

The case hinges on the group’s effort to have a chimpanzee called Tommy removed to a sanctuary to live out the remainder of his days.

The charity says Tommy is being held captive in solitary confinement in a “small, dank, cement cage in a dark shed in temperatures” well below those of his native land in Africa.

“He is unable to do the things that are natural to chimpanzees. He cannot build a nest, socialize with others of his own kind, or forage for food,” the charity says on its website.

Last year, his owner Patrick Lavery told local newspaper Times Union that the chimp “likes being by himself” and has a television set, cable and a stereo for entertainment.

The group also wants freedom for three other chimps — Kiko, deaf and living in a private home, and Hercules and Leo, owned by a research center and used in locomotion experiments on Long Island.

A hearing was held in Kiko’s case before a court in Rochester, New York on Tuesday.

The Nonhuman Rights Project says Kiko is partially or totally deaf because of abuse suffered on the set of a “Tarzan” movie before being acquired by his current owners.