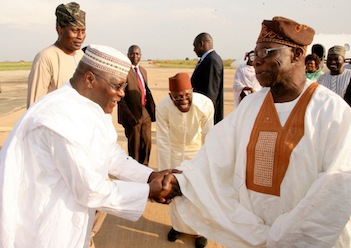 A leading presidential aspirant on the platform of the All Progressives Congress (APC), Atiku Abubakar has declared that he has fully reconciled with his former boss, former President Olusegun Obasanjo.

The former Vice President also identified waste, poor management and failure to diversify the economy by the current administration as the reason for the adverse economic impact of the fall in oil price.

Atiku affirmed at an interactive session with the Catholic Bishops of Nigeria Conference (CBNC) that there is no animosity left in the relationship with his former boss and that bygones are bygones.

Atiku made this revelation at a parley he held with representatives of the Catholic Bishops Conference of Nigeria in Abuja.

Both Clergymen expressed disappointment at the celebrated face-off between these two men when they were in power as President and Vice President between 1999-2007.

Dr Obinna said that in 1999, both Obasanjo and Atiku started well to the admiration and high expectation of Nigerians, only for the people to be disappointed when rift and ill-will developed between them, thereby derailing the progress of the nation.

Describing the Turaki Adamawa as an open-minded individual, the Archbishop of Owerri said he is impressed by Atiku’s interest and commitment to national unity and fairness.

Responding to the concerns of the Clergy men on the insurgency ravaging the country, and the accompanying insecurity, the APC presidential front-runner told the CNBC led by the Most Reverend (Dr.) Ignatius Kaigama that it is the duty of the political and military leadership to crush insurgency whenever and wherever it rears its ugly head.

Atiku reminded the Bishops that when he was in government with Obasanjo as President, an insurgent group, known then as Nigerian Taliban started problem in the North east but was crushed within three weeks. The APC presidential aspirant revealed that the Obasanjo administration in which he was the deputy moved so fast to uproot the insurgents that many Nigerians till today do not even remember there was an insurgency.

He also said that aside from crushing the insurgency through leadership, the leader should also mobilize resources to provide socio-economic opportunities and an enabling environment to keep youths and the able-bodied men and women productively engaged while the military need training and re-training to make them efficient.

Speaking on the state of the economy, the leading APC presidential aspirant said that had we been able to diversify and manage our economy in such a way that we conserve rather than waste our resources in surplus years, the present austerity measure would not be necessary.

According to the former Vice President, period of boom and austerity occur in cycles in capitalist economies but to minimize the impact and ensure that the citizens do not suffer during the drought years depends on what the leadership did with the years of plenty.

The APC presidential hopeful recalled the years of his Vice Presidency when the administration he served in was moved to create the Excess Crude Account by the desire to have a fallback position for the nation’s economy.

He said the idea behind the Fund is to have a pool where excess resources can be pooled to take care of the years of drought.

Atiku revealed that it was also this problem and the need to streamline the country’s alarming debt profile when he was in power with former President Obasanjo that compelled him to get the World Bank to assign then Dr Ngozi Okonjo-Iweala to join his economic team in the Presidency to locate and collate the country’s actual debt for liquidation.

He said the current Minister of Finance worked in his office for nine months and that the effort culminated in the establishment of the Debt Management Office (DMO).

He stated that careful management of resources and diversification of the economy is the responsibility of a committed and focused leadership and urged Nigerians to use the opportunity of the 2015 polls to choose the right person and political party to lead the country.

He identified the issue of indigeneship as a serious impediment to unity among Nigerians.

Atiku said the prevailing situation where young and innocent Nigerians who are born in places other than where their parents come from and who have spent their entire lives in those parts of the country are discriminated against as non- indigenes is not good for the country.

He said everything must be done by political, community and religious leaders to combat the issue of indigeneship and allow Nigerian citizens no matter their ethnic origin to be free in any part of the country they were born or reside.

The Turaki Adamawa told the Bishops that it is unfortunate that a Nigerian would go to the US or some European country to give birth to a child and the later would instantly acquire American citizenship while in Nigeria, indigeneship question dominate our discourse.

He called on religious leaders to preach against this issue and encourage their congregation to love one another and promote national unity. He said the problem of disunity is not insurmountable because everyone listens to religious leaders and tend to trust them.

On the issue of inability to access land for the building of Churches and schools by religious bodies in some parts of the country, the APC presidential aspirant said this problem is due to ignorance which can be solved by good leadership. He said that even in the societies more Islamic than some parts of Nigeria, one would see churches being built for Christian worshippers who are minorities adding that Islam does not encourage discrimination.

Some of the Bishops also raised the problem of school ownership and how they are not allowed access to their schools even when they pay ground rent to the authorities especially in some parts of the North.

Atiku said such should not obtain at least not when education has been deregulated. He told the Catholic Bishops that his government would put an end to all such injustice and oppression.

Atiku told the Bishops that he needed to see them and rub minds because of the fact that they constitute a “strong moral voice in our society and that for that reason, our country needs them more than before in view of the problems facing the country, and the need for all and sundry to work together to salvage the nation.”

He said it is important that he presents himself before the clergy so that they can meet him in flesh aside information about him that may be available to them through third parties so that he can discuss his plan with them.

Atiku lamented to their Lordships that “our country is going through very difficult times, especially general insecurity all over the country, but particularly in the North east and which is spreading but unfortunately poorly managed.”

He told his audience that all religious leaders, Christian and Muslim alike, need to moderate their language when commenting on the present insurgency adding however that the nation expects them (the Clergy); to speak out and help proffer solutions to the insurgency as no one would accuse them of seeking political advantage.

In their response, the Bishops thanked the presidential aspirant for finding time from his busy schedule to exchange views with them and intimate the Catholic community in the country of his political ambition.

The Chairman of the session and President of the Catholic Bishops Conference of Nigeria, the Most Reverend Ignatius Kaigama, who is also the Archbishop of Jos described Atiku’s presentation as “Food for thought that sounds presidential.”