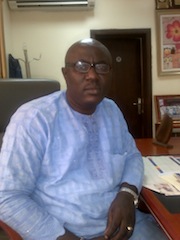 The lawmaker representing Apapa Constituency 1 at the Lagos State House of Assembly, western Nigeria, Mufutau Egberongbe, has petitioned his party, the All Progressives Congress, APC, arguing that the state Commissioner for Agriculture and Cooperatives, Gbolahan Lawal, influenced the results to favour his sister, Mojisola Lawal.

Egberongbe, who contested in the primary election, said Lawal, who was not a delegate in the exercise conducted in the constituency on Tuesday, stormed the venue of the election and began canvassing for votes for Mojisola Lawal, who later emerged winner.

In the petition to the state chapter of the party through his solicitor, Oluwole Oguntokun of Ogutokun and Oguntokun Legal Practitioners, Egberongbe complained that Lawal was not supposed to be at the venue for any reason since he was not a delegate, a contestant or an election observer.

In the petition which was copied the party’s National Chairman, John Odigie-Oyegun; its National Leader, Asiwaju Bola Tinubu; its National Vice Chairman, South-West; Lagos Central, Vice Chairman, All APC leaders in Apapa as well as the Department of State Security, DSS, Apapa Local Government, Egberongbe is requesting that persons alleged to have influenced the outcome of the election be investigated and summoned for interrogation for contravening the guidelines of the party.

Dated 2 December, 2014, the petition obtained by P.M. NEWS and titled: ‘Petition Of Breach To The Guidelines For The Nomination Of State House of Assembly Candidate At Apapa Constituency 1’, stressed: “we are reliably informed by our candidate that the primary that was conducted at Apapa Local Government Mini Stadium, Ibiere Crescent, Apapa, for the nomination of candidate for Apapa Constituency 1, was totally influenced by some leaders of the party that ought not to be at the venue of the primary election.

“Furthermore, we are informed by our client that the Commissioner for Agriculture and Cooperatives, Gbolahan Lawal was present at the election venue canvassing the delegates to vote for a particular aspirant, Mojisola Lawal (who incidentally is a direct sibling with the Commissioner).

“We are of the opinion that the guidelines for the nomination of candidates at primaries election of APC stated clearly that non accredited delegates should be at the venue for whatsoever reasons.

“We are also informed by our client that the immediate past vice chairman of Apapa LG, Cecilia Bolaji Dada, who is not one of the accredited delegate was equally present at the venue distributing 10kg bag of rice to influence and induce delegates to vote for Mojisola Lawal.

“We are equally informed that the immediate past Secretary to the Apapa LG, Elijah Owolabi Adele in conjunction with the Apapa LG APC chairman, Fatai Sanni conveyed the electoral officers to a secret place on December 1, to influence the outcome of the primary in favour of Moji Lawal.”