Court To Rule On TB Joshua's Application On Dec 10 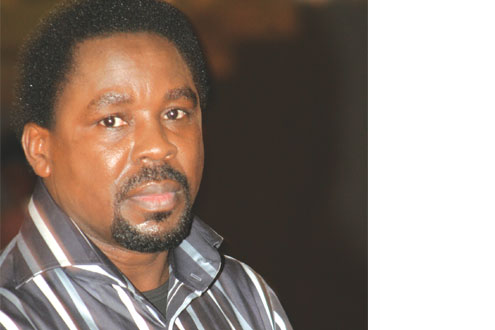 The coroner’s court investigating the collapse of a guest house within the Synagogue Church of All Nations has fixed December 10 to deliver ruling on an application filed by Prophet Temitope Joshua  seeking a stay of proceedings on the inquest.

It will be recalled that 116 persons were killed after the six-storey building collapsed on Sept.12.

However in the application, Ojo asked the court for an order to stay proceedings on issues relating to calling of witnesses in respect of the building approval or material tests of the collapsed building.

He also asked for an order to suspend further action on the invitation issued to Joshua to appear before the inquest to give evidence.

According to him, the stay of proceedings is pending the determination of another suit he had filed against the coroner before Justice Lateefat Okunnu of an Ikeja High Court.

Moving the application, Ojo argued that the application before the high court was for a judicial review to ascertain whether Komolafe had exceeded the statutory jurisdiction of the coroner’s court.

“It is our view that the strict scope of the coroner’s inquest is to ascertain the cause and manner of death and it will be in the best interest of all of us to get a judicial interpretation from a superior court.

“The best and reasonable cause of action for this court is to stay proceedings of the issues in contention, pending the time the high court will deliver its pronouncement one way or the other,” Ojo said.

He therefore urged the coroner to accord the high court respect and dignity by not taking any further action that could prejudice the suit before Okunnu.

Responding, Adeniran argued that Section 40 of the Coroner’s System Law empowered the coroner to investigate and determine the cause of death of an individual who died under suspicious circumstances.

“There is nothing in the Coroner’s System Law that reduces its jurisdiction.

“This honourable court, in our opinion has not exceeded its jurisdiction,” he said.

Adeniran further argued that the suit before Okunnu did not translate to an automatic stay of proceedings of the coroner’s inquest.

He said:” At the time the high court granted the applicants leave to apply for the judicial review, the judge was in a position to grant them a stay of proceedings but did not.

“As it stands, there is no order from the high court for a stay of proceedings.”

Adeniran also argued that Joshua and the church had not presented sufficient materials before the court to warrant the coroner to exercise his discretion in their favour.

He therefore asked the court to dismiss the application.