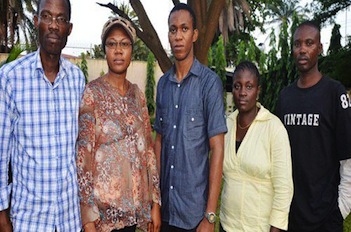 The five APC staff tortured and forced to confess

The DSS resorted to torture to obtain forced confessions from the workers who were arrested during the raid of the All Progressives Party Data Centre in Ikeja, the party said in a statement issued today.

APC, the main opposition party in Nigeria called the DSS act a contravention of the UN Convention against Torture to which Nigeria is a signatory and a violation of the citizens’ fundamental human rights.

In a statement issued in Lagos on Friday by its National Publicity Secretary, Alhaji Lai Mohammed, APC said the DSS personnel who arrested the workers shackled their hands and legs and blindfolded them while they were being taken to Abuja.

”The workers remained in chains even at the dark detention cell where they were made to sleep on the bare floor for the 10 days they were detained illegally, while none of their family members knew their whereabouts all through their ordeal. Guns were pointed at their heads by DSS personnel who threatened to shoot them, while verbal insults were hauled at them as if they were common criminals. It is simply incredible that Nigerians can be treated like this under a democratic dispensation,” it said.

APC also said a pregnant woman among those who were arrested was denied access to her drugs even when she started bleeding due to the torture to which she was subjected by the DSS.

The party said having coerced, tortured and bullied them to say and write what suits the purpose of the DSS, the agency now gleefully issued a statement saying what it has found during its investigations, in the wake of the illegal raid on the APC Data Centre, will shock the world.

”DSS, Nigerians and indeed the entire world are already shocked by your actions, including the resort to the use of torture, in violation of an international Convention which Nigeria has signed and ratified, to obtain false information from the arrested APC workers. What more shock can come from an institution of state that treated Nigerian citizens like animals in a gross violation of fundamental human rights?

APC vowed to seek justice for the innocent Nigerians who were treated worse than prisoners of war in their own country, by an agency of state that is maintained with tax payers’ funds, and which is expected to be fair and non-partisan in its operations.

The party also said every legal measure would be taken to ensure that the DSS does not profit from its wanton use of torture, intimidation and verbal assault of innocent citizens to obtain forced confessions just to satisfy its masters

It reiterated its earlier call on all Nigerians with the necessary influence, including statesmen, professionals, as well as religious leaders, to call the DSS to order before it plunges the nation into chaos with its shameless, unprofessional and crude tactics in support of a desperate power mongers.

”Our democracy is in clear and present danger, not just from desperate politicians, but also from institutions of state that have compromised in their roles and resorted to crass lawlessness,” APC said.

In an interview with TheNation the arrested Data Centre workers said after their interrogators told them in Lagos that were changing location, they were driven straight to the Presidential Wing of the Muritala Mohammed International Airport (MMIA), Lagos from where they boarded military plane marked NAF 918.

“On arrival at the Nnamdi Azikiwe International Airport, Abuja, they were asked to mask their faces with their singlets. “They (security operatives) put handcuffs on our hands and chained our legs after hounding us into a Coaster bus with tinted glass,” Fayemi recalled.

Scared with the reckless way the driver drove and the way the operatives that received them spoke in coded language, they felt the end had come.

Fayemi said: “We thought we were going to face the firing squad. The driver drove the bus with neck-breaking speed. They made a mockery of us and called us unprintable names, such as ‘monkeys’, ‘hackers’ and ‘presidential suspects’ among others.”

The Data Entry Supervisor said neither he, nor any of his colleagues knew the location in which they spent a week in the Federal Capital Territory (FCT).

According to him, they were allowed to remove their veils only when they entered the bathroom or in the cells. Their interrogations, he said, were either in oral or written format, depending on the mood of the interrogators.

They alleged that their interrogators tried all they could to work toward a prepared answer just to justify the invasion.
They recalled how their interrogators asked them if cases of multiple and under-aged registration were ever reported to security agencies.

According to Fayemi, a document tagged: Ojo Local Government, Araromi Ward, was thrown at him by an officer to peruse. The document, he alleged, had columns for the names and telephone lines of voters from the ward.

He told the officer that such document has no correlation with their operation at the APC Data Centre.

Alleging that the interrogation was to justify their arrest and detention, Fayemi said: “In the room where they gave me the document to browse, I saw a file to which all our written statements are attached. It is marked C.F. 1811. They wrote Case File of the Investigation of the APC/INEC Cloning Centre.

“So, they have concluded our matter even before the conclusion of the investigation. They asked us to come back today (yesterday) but our lawyer is handling that.”