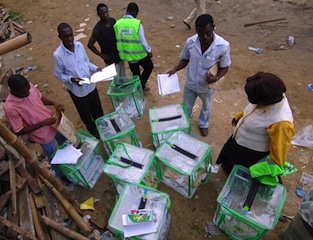 Fraudsters posing as the Independent National Electoral Commission (INEC) recruitment officers are now collecting money from unsuspecting individuals in Zamfara state, northwest Nigeria, with the promise to give them employment.

Investigations by NAN in the state revealed that many unemployed youths had already fallen victims to the fraudsters.

Some had given money to fraudsters with the hope that they would serve as the ad-hoc workers in the 2015 general elections.

Some of the victims who spoke with NAN on conditions of anonymity said the fake INEC officers made contacts with them through phone calls.

The victims were directed to where they met the fake officials and given forms to fill and were also made to pay money ranging from N5,000 to N10,000 to guarantee the arrangement.

When contacted on the development, however, the Head of Voter Education and Publicity in INEC, Mr Garba Galadima, said he had heard about the fraudsters.

Galadima, who said no formal complaint was reported to the commission, also implored members of the public to be wary of anyone who tried to deceive them on the recruitment of ad-hoc workers.

He said the recruitment was free and could only be processed online through the commission’s website – iasd.inecnigeria.org.

He said the online recruitment had already commenced and would end on Dec. 11, adding that all relevant details were obtainable from the website.