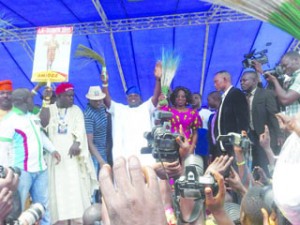 After almost twenty-four hours of voting and counting of ballots, Mr Akinwunmi Ambode, former Accountant General of Lagos, emerged winner of the All Progressives Congress, APC, governorship primaries in Lagos by a landslide on Friday morning.

The results were announced by Dr. Peter Obada, a representative of the APC National Primaries Committee around 8.13 am on Friday after counting was done all through the night.

Following Ambode in second position is the Lagos State Commissioner for Works and Infrastructure, Dr. Kadri Hamzat, who polled 1,201 votes.

Former Attorney General and Commissioner for Justice, Supo Sasore came 5th after polling 121 votes, while the former Commissioner for Health in Lagos State, Dr. Leke Pitan was 6th with 112 votes.

Announcing the results, Obada said he was highly impressed by the people of Lagos and what the leadership of the party put in place to ensure a smooth primary election in the most transparent manner.

“We tried as much as possible to be fair to all,” he said, while commending the aspirants for their maturity,  saying that in every contest, there must always be a winner.

He said if any aspirant was not satisfied with the result, such person should go to the committee set up by the party.

Obada said since Ambode scored 3,735 votes “he is hereby declared winner,” to the joy of his supporters at the event.

There were jubilation all around Onikan Stadium as the popular song, “stand up for the champion,” rent the air, with party supporters brandishing APC’s symbol, the broom.

Speaking after the victory, Ambode said the accepted the victory with deep sense of gratitude, while commending the contestants for putting up a good contest.

Ambode extended his hand of fellowship to other aspirants, not only to win next year’s election, but to move Lagos forward to grester heights.

The governorship primary started on Thursday at the Onikan Stadium where over 5,000 delegates converged to choose the governorship candidate that will fly the banner of the party in 2015 gubernatorial election in Lagos.

At about 12.59 p.m, Akinwunmi Ambode came to the venue of the primaries to a tumultous reception as the party leadership announced the closure of accreditation in preparation for the commencement of voting.

Chairman, APC, Lagos State, Ajomale said the task before the aspirants was not going to be easy, but noted that all aspirants were qualified to represent the party at the governorship election.

“But only one of you will emerge among 13 of you. You are all respected leaders of the party, but remember that only one of you will emerge. There is no winner, no vanquish, you are from the same family. Whatever result we have today, know that it is not a do or die affair. Let the battle begin,” he said. Earlier, Obada who moderated the election said the APC is a party set to change things in Nigeria.

In the light of this, he said “charity must begin from our own bedroom. Lagos has been a model for democracy.

According to him, aspirants had the right to complain and make recommendation to a committee that had been set up for that purpose. He said the primary purpose of the APC was to capture power at the centre as the PDP had sent the nation into mourning because unrighteous people were in power.

Before voting began, Ajomale came to the podium to announce that a text message had been sent to delegates using his name and claiming that he had asked them to vote for a particular aspirant.

“I did not send text message or tell anybody to vote for certain aspirant, all the delegates are mine. Vote according to your conscience, I denounce that text message openly here,” he said.

National leader of the APC, Asiwaju Bola Tinubu had earlier charged all the governorship aspirants of the party in Lagos to accept the result of the primaries whenever it is announced in order to move the party forward.

The former governor, who was not at the event, but his speech was read by the Lagos Publicity Secretary of the party, Joe Igbokwe, said over 6,000 delegates had gathered to choose a governorship candidate among the 12 aspirants, saying the event marked the beginning of the march for democracy.

Commending the aspirants for playing the game with decorum, Tinubu reminded them that only one of them would emerge winner at the end of the day.

“All of you are qualified but only one of you will win. We must join hands together to ensure the party wins at the general elections.

“The way you conduct yourself will determine how Lagos State presents itself. All of you should comport yourselves and accept the result of the primaries as the choice of the party,” he said, adding that the party had worked tirelessly to make “today possible.”

According to Tinubu, the ememies of the party laid in wait to see if the APC would fail, urging the aspirants that none of them should tear the party.

“No one should tear down, let us put the enemies to shame and remain as one big family,” he appealed to the contestants.