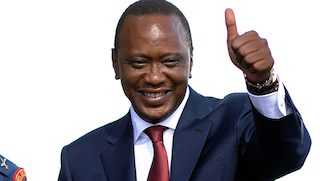 The International Criminal Court’s chief prosecutor on Friday dropped a case against Kenyan President Uhuru Kenyatta alleging crimes against humanity, saying there was insufficient evidence to take him to trial.

“The Prosecution withdraws the charges against Mr Kenyatta,” Fatou Bensouda said in a document filed at the Hague-based court, adding “the evidence has not improved to such an extent that Mr Kenyatta’s alleged criminal responsibility can be proven beyond reasonable doubt.”

The bombshell announcement comes two days after the ICC’s judges gave prosecutors one week to strengthen or drop crimes against humanity charges against Kenyatta, saying a trial could no longer be postponed.

Kenyatta, 53, faced five charges including murder, rape and deportation for allegedly masterminding post-election violence in the east African country in 2007-08 in which more than 1,200 people died and 600,000 were displaced.

Legal experts say the announcement after a marathon four-year investigation, littered with allegations of witness intimidation, bribery and false testimony, will come as a severe blow to Bensouda’s office and the Hague-based ICC, set up in 2002 to probe the world’s gravest crimes.

Kenya fought an international campaign to put Kenyatta’s trial on hold, as well as that of his rival-turned-partner William Ruto, who has been on trial at the ICC on similar charges since September 2013.

Both men reject the charges.

African leaders also frequently called for the charges to be withdrawn, saying the ICC’s investigations unfairly targeted their continent.

Prosecutors in a last-ditch effort to build a case against the African strongman, asked judges to postpone the trial and rule that Nairobi refused to cooperate in a request to hand over documents which prosecutors said may prove Kenyatta’s guilt.

But the ICC’s judges on Wednesday slapped down the request, instead giving Bensouda’s office seven days to beef up the charges or drop them.

Bitter memories are still fresh in Kenya from 2007, when post-poll violence shattered the country’s image as a beacon of regional stability.

What began as political riots quickly turned into ethnic killings of Kenyatta’s Kikuyu tribe, who in turn launched reprisal attacks, plunging Kenya into its worst wave of u/ccrnrest since independence in 1963.