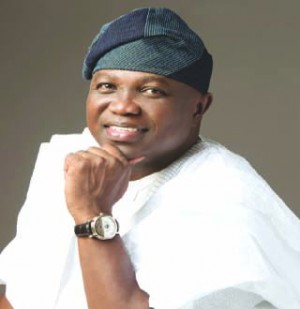 Akinwunmi Ambode, who was Friday morning elected as the All progressives Congress, APC, governorship candidate in next year’s election in Lagos State, has dedicated his victory to Lagosians and democracy, saying Lagos deserves good governance.

In his speech shortly after he was announced as the winner, the former Accountant-General of Lagos State said: “My fellow Lagosians, it is with deep sense of gratitude and humility that I accept this ticket to run as the flag bearer of our great party, APC, in the 2015 governorship election in the state.

“This was made possible by you the people through the delegates. To my fellow contestants, I have nothing but commendation and respect for putting up a good contest, so I extend my hand of fellowship to join me, not only winning the general elections in 2015, but to build on the tradition of excellent governance that our party is known for in Lagos.

“The flag of our party that you handed over to me, I accept with a deep sense of history knowing full well that Lagos deserves nothing but the best in terms of good governance and dynamic  development. We’ll have the mega city built upon, the responsibility belongs to all of us. Let us put aside the disappointment of yesterday and embrace the opportunity of today.”

Announcing the result earlier, the chairman of the APC Committee for the state House of Assembly and governorship primaries, Rev. Peter Obadan, commended the aspirants for demonstrating maturity throughout the exercise.

He said in any contest there must always be a winner and therefore certified that Akinwunmi Ambode with the largest number of votes has been declared the winner.

He announced that whoever is not satisfied with the result could go to the appeals committee which has been set up by the party.

In his own comment, the Chairman, Conference of National Political Parties, CNPP, Lagos State, Akinola Obadia who was accredited as an observer, also described the exercise as  transparent and would end speculations about imposition in the APC.

A member of the House of Representatives from Ikeja Federal Constituency, Abiodun Faleke said: “those who say there is no internal democracy in the APC can now see that the party has its unique and quality way of handling internal democracy. PDP should take a cue from us by conducting transparent primaries.”

The Chairman, Lagos APC, Otunba Henry Ajomale thanked God that everything went well and expressed his gratitude to the contestants, delegates, party officials, security operatives and journalists among others for their roles during the 24-hour exercise.