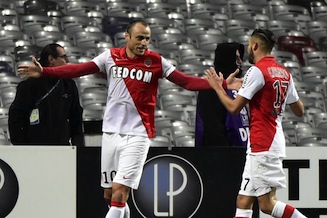 Veteran Bulgarian Dimitar Berbatov scored a brace as Monaco warmed up for a decisive Champions League date with a 2-0 win away to Toulouse in Ligue 1 on Friday.

Berbatov’s neat finish put the principality club ahead on the stroke of half-time at Le Stadium and the former Manchester United man then converted a penalty in the second half as Monaco climbed provisionally up to seventh in the table.

Leonardo Jardim’s side have spent most of the season playing catch-up with their rivals at the top of Ligue 1 but this win is a timely boost ahead of Tuesday’s home Champions League clash with Zenit St Petersburg, in which a draw will be enough to take them through to the last 16.

Monaco have significant selection problems in defence that will continue to cause concern when the Russian side come calling, with Ricardo Carvalho, Layvin Kurzawa and Elderson Echiejile sidelined as well as midfielder Geoffrey Kondogbia.

With young Brazilian Wallace suspended for the trip to south-west France, Aymen Abdennour was partnered in the heart of the defence against his former club by midfielder Jeremy Toulalan.

Nevertheless, the makeshift back four kept a clean sheet while Berbatov made it three goals in his last two games after previously not finding the net since August.

After Bernardo Silva had an effort cleared off the line by Dragos Grigore, Berbatov opened the scoring right on half-time with a sweet finish across goalkeeper Ali Ahamada after neatly controlling Anthony Martial’s centre.

Ahamada saved from Silva right at the start of the second period but Monaco eventually doubled their lead with 13 minutes left, Berbatov coolly converting a penalty awarded for a foul on Fabinho.

Reigning champions Paris Saint-Germain, who go to Barcelona in the Champions League next midweek, currently trail leaders Marseille by a point but can go provisionally top of the table with the right result when they host Nantes on Saturday.

Marseille are looking for an eighth consecutive home win when they face Metz on Sunday evening.