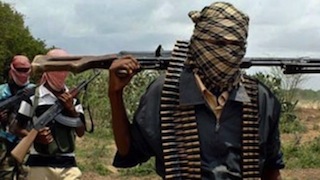 Gunmen suspected to be armed robbers on Saturday attacked Minna Medium Prison, broke into the cells and set 270 inmates free.

Three members of the gang dressed in ‘Jalamia’ (robe), stormed the facility at about 4:30p.m and overpowered the prison officials; broke into the records and armoury rooms and carted away some weapons and bullet proof vests.

It was also gathered that scores of other gunmen took strategic positions round the prison in an operation that lasted for 10 minutes.

A security man who was injured at the entrance of the prison is receiving treatment in an undisclosed hospital in Minna.

It was gathered that as soon as the three-man gang entered the prison, they fired gun shots into the air and ordered all the inmates out.

A prison official who spoke on condition of anonymity said that two notorious armed robbers and 268 inmates escaped with the gunmen.

“We had 323 inmates in our various cells but we are left with only 53 in one of the cells. Our gateman was injured; they broke into our armoury and carted away weapons and bullet proof vest.

“From where I took cover, I saw Osama, one of the notorious armed robbers in the prison firing shots into the air.
“ I want to believe his gang brought the gun and I saw him leading Ayo (Eze Ego), a dismissed Mopol and other inmates, out.’’

The armed men later snatched a Honda Car and escaped with it.

The state Commissioner of Police, Mr Emmanuel Amore, who visited the scene, said his men found four of the inmates that escaped and that he has directed a massive man hunt for the inmates.

He also said that a Sienna Toyota car with four AK47 rifles believed to have been used by the gang had been impounded.

He said investigation had commenced.

In the last few weeks, two Nigerian prisons in Lokoja and Ado Ekiti have been attacked by gunmen, leading to jailbreaks.