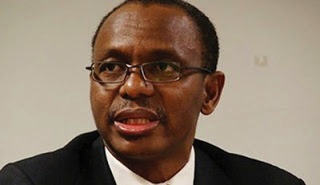 Nasir el-Rufai, the All Progressives Congress governorship candidate in Kaduna state said he and his team will make Kaduna great again. In his acceptance speech, the former minister of the Federal Capital Territory said the state is in “dire condition” and needs to be fixed.

The diminutive APC leader stated that his team has figured out how to rescue the state having discussed the symptoms, diagnosis and solutions with various constituencies across the state.

“After months of hectic campaigning, our party, the APC, has made its choice regarding its candidate for the governorship of Kaduna State in the 2015 elections. It is a choice I accept with gratitude and humility.

“I salute all the elected executives at ward, local government and state levels, as well as statutory delegates who voted in our party primaries. I pay heartfelt tribute to the distinguished party men who also aspired for and campaigned to be chosen as the APC governorship candidate.

“Your energetic campaigns have helped to build and strengthen our party; and the party, its members and supporters would continue to expect your leadership and worthy contributions.

“It is now time to pull all our energies and talents together to elect an APC government in Kaduna State. This is a mission to fulfill the aspirations of the people, and a mighty task that duty demands we successfully achieve.

“I hereby invite the distinguished persons with whom we competed for the nomination to continue to discharge our responsibilities together, under the leadership of the party at the state level, to design and launch a state-wide campaign as soon as possible.

“With your support, I pledge to run a campaign that engages and mobilizes all the people of Kaduna State for the necessary work of change, to throw out a spendthrift, ineffectual PDP gang and elect a government committed to participatory governance and sustainable empowerment of the people.

“The APC Kaduna Team is ready to provide a government guided by fairness, passion and commitment. I am proud to be a member of this team, and I will discharge my leadership role within it with the vision, integrity and results-orientation that have been the hallmark of my public service.

“We really do not have the time to exult in celebrating our choice as the APC Kaduna State governorship candidate. What has actually been decided is the team vested by the APC membership with the responsibility of realizing the hopes of our people for positive change; their desire for a Kaduna State whose governance is configured to converge with their expectations for a better life.

“This APC team must become Team Kaduna as we work hard across this state, to enthuse the people and to unite them in a common quest to enthrone good governance, human security and fairness.

“We take seriously our duty to work for a harmonious society where our people and their talents will thrive in peace, confident in the equality of their treatment as citizens by a government committed to social justice.

“We are ready to make Kaduna State great again. We have pondered how our dear state came to this dire condition. We have sweated on rescue options, discussed symptoms, diagnosis and solutions with various constituencies across the state. Based on these engagements, the APC Kaduna Team has already presented a draft manifesto.

“That document is by no means the end of the conversation; rather it helps to further structure the conversation around the most optimal policies and programmes. It is also a clear indication of the values that will guide an APC government in our state.

“Our programme is extensive, the challenge is huge but we are making the mental and political effort to be ready to effect coherent governance from the very first day in office.”

He said following consultations within the party, the APC Kaduna team will shortly announce the formal launch of its general election campaign.

“We have started a determined journey,” he said. “Together with all the peoples of Kaduna, we will work to make Kaduna State a better place. Let’s make Kaduna great again.”