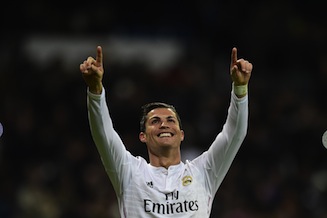 Cristiano Ronaldo netted a record 23rd hat-trick in La Liga and his 200th goal in the Spanish top flight as Real Madrid equalled a Spanish record of 18 consecutive wins in all competitions with a 3-0 win over Celta Vigo on Saturday.

Carlo Ancelotti’s men have now matched the winning run record set by Frank Rijkaard’s Barcelona side in the 2005/06 season, and have the chance to go one better at home to Ludogorets in the Champions League on Tuesday.

Ronaldo rolled home a contentious penalty nine minutes before half-time after referee Alberto Undiano Mallenco ruled that Jonny Castro had pulled down the World Player of the Year as he tried to latch onto a cross before smashing home a loose ball inside the area midway through the second-half.

The Portugal captain then sealed his latest record mark when he converted Marcelo’s cross at the far post nine minutes from time.

Champions Atletico Madrid enjoyed a comfortable 2-0 win at Elche and remain four points behind their city rivals in the table.

European champions Real killed off many of their opponents in the opening stages during their stunning run, but they had to be patient on Saturday as a mixture of profligate finishing and good defending by the Galician outfit held them at bay.

Sergio Ramos should have marked his 300th La Liga appearance for Los Blancos with a goal when he miscued from close range after Sergio Alvarez had parried a header from Ronaldo.

Castro then made a brilliant last-ditch challenge to prevent Ronaldo at the back post before the Portuguese star sent a stunning overhead-kick flying onto the roof of the net.

However, when the breakthrough came it was in controversial circumstances as there appeared to be little contact between Castro and Ronaldo.

It made no difference to Ronaldo, though, as he stepped up and confidently dispatched the spot-kick.

Celta had offered nothing of an attacking threat in the first-half, but came close to an equaliser at the beginning of the second period when Fabian Orellana pulled a shot just wide of the target.

The hosts were further disrupted when James Rodriguez hobbled off to be replaced by Alvaro Arbeloa.

Yet, the Colombian’s absence didn’t affect their flow going forward as Alvarez had to beat away a fierce drive from Bale at the end of a quick counter-attack.

Ronaldo killed the game as a contest moments later when Toni Kroos’s deflected pass looped into his path, giving Alvarez no chance with a sweetly struck volley.

Karim Benzema should have handed Ronaldo his record when he opted to go for goal with a poorly attempted chip rather than square it to his teammate who had a open goal moments later.

It didn’t matter, though, as a typical energetic burst from Marcelo took him into the Celta box and Ronaldo was on hand to turn the ball home at the far post.

Atletico were also comfortable victors at Elche to register their fifth consecutive win in all competitions and move into second place above Barcelona, who entertain Espanyol on Sunday.

Jose Gimenez fired them in front with his first goal for the club after good work from Koke and Arda Turan early on.

Eight minutes after the restart Atletico made the game safe when captain Gabi won possession just inside the Elche half and clipped a delightful ball over the top for Mario Mandzukic, whose near post effort surprised Przemyslaw Tyton in the home side’s goal.