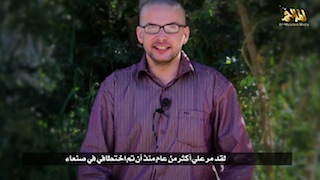 A file video grab taken from a propaganda video released by al-Malahem Media on December 4, 2014 purportedly shows US hostage Luke Somers, 33, kidnapped more than a year ago in the Yemeni capital Sanaa

American journalist Luke Somers and a South African hostage were killed on Saturday during a failed attempt by US forces to rescue them from Al-Qaeda militants in Yemen.

Somers’s death was announced by US Defence Secretary Chuck Hagel, who said the raid was carried out because the photojournalist’s life was believed to be “in imminent danger”.

Al-Qaeda in the Arabian Peninsula (AQAP) had on Thursday threatened to execute Somers, 33, who was kidnapped more than a year ago in Sanaa.

“Both Mr Somers and a second non-US citizen hostage were murdered by the AQAP terrorists during the course of the operation,” Hagel said in a statement released during a visit to Kabul.

South African hostage Pierre Korkie was also killed in the raid, according to a charity that had been negotiating his release.

The Gift of the Givers said that Korkie’s death came a day before he was due to be freed after more than a year in captivity.

“The psychological and emotional devastation to (his wife) Yolande and her family will be compounded by the knowledge that Pierre was to be released by Al-Qaeda tomorrow,” it said.

A tribal leader said soldiers were seen parachuting into the area.

Heavy clashes ensued in Nusab, a militant stronghold, according to residents who reported hearing loud explosions.

Hagel said the rescue attempt was conducted in partnership with the Yemeni government.

The operation “is a reminder of America’s unrelenting commitment to the safety of our fellow citizens — wherever they might be around the world,” he added.

The United States has said that American and Yemeni forces had already tried unsuccessfully to rescue Somers last month.

According to Yemen’s defence ministry, Al-Qaeda moved hostages, including the US journalist, a Briton and a South African, days before that US-Yemeni raid in southeastern Hadramawt province.

Yemeni officials said eight other hostages were freed in the earlier operation.

Yemen is a key US ally in the fight against Al-Qaeda, allowing Washington to conduct a longstanding drone war against the group on its territory.

AQAP is considered by Washington to be the most dangerous affiliate of Al-Qaeda.

The execution threat by AQAP followed the murder of five Western hostages since August by the Islamic State group that controls parts of Syria and Iraq.

Al-Qaeda has exploited instability in impoverished Yemen since a 2011 uprising forced president Ali Abdullah Saleh to step down.

In recent years there has been a growing number of abductions in Yemen by Al-Qaeda.

The militants remain active in southern and eastern regions of Yemen despite several military campaigns by government forces.

Al-Qaeda militants have allied with Sunni tribesmen in southern Yemen to halt the advance of Shiite Huthi militias who seized Sanaa in September unopposed, and who have since extended their control to coastal areas and regions south of the capital.