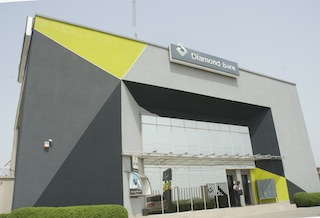 A Federal High Court, sitting in Lagos, Southwest Nigeria has ordered 19 commercial banks in Nigeria, not to allow businessman Chief Sunny Odogwu, and his two companies: Robert Dyson & Diet Limited, and SIO Properties Limited, from making any instruction, demanding or withdrawal from their accounts.‬

The order of the court was sequel to an order of Mareva injunction sought by a commercial bank, Diamond Bank Plc, for alleged refusal of Chief Odogwu and his companies to offset the loan of N26,229,943,035.22, they obtained from the bank‪.

The presiding judge Saliu Seidu has adjourned till December 12, when the substantive suit will be heard. The plaintiff, Diamond Bank Plc, in a motion ex-parte filed before the court by its lawyer, Oluwakemi Balogun, SAN, urged the court for an order directing the banks or any other financial institutions to sequestrate within three days of the receipt of the order the court and any or all the sums of money or negotiable instruments standing to the credit of the Chief Odogwu and the two companies, their servants, agents, privies, nominees whether natural or artificial up to the outstanding indebtedness of the defendants to the bank in the sum of N26,229,943,035.22 and that the said amount be kept in the name of the Chief Registrar of Federal High Court, pending the determination of the motion on notice.‬

The bank also sought for an order restraining Chief Of Odogwu and his two companies, their agents, privies, or assigns from disposing, selling, transferring, and or alienating any of its movable or immovable asset, money, share, stock and other negotiable instrument pending the determination of the substantive suit.‬

‪The bank also sought for an order of injunction restraining Chief Odogwu, his agents, privies, servants, or assigns from personal asset, money, shares, stocks, and other negotiable instruments, however described and wherever located, pending the determination of the substantive suit.‬

The bank in an affidavit in support of the application sworn to by Fanen Shambe, the bank’s Relationship Manager, averred that sometimes in 2007, SIO Properties Limited, and Chief Odogwu, on behalf of Robert Dyson & Diket Limited company, approached the bank and required huge finance to be applied and disbursed as at when due for their project called ‘Luxury Collection Hotels and Apartments’, formerly Le Meridian Grand Tower, to be constructed at 31-35, Ikoyi Crescent, Ikoyi, Lagos, in the name of SOI Properties Limited of which Chief Sonny Odogwu is the chairman and beneficial majority owner.
‪
The deponent also averred that Chief Odogwu, convened through the SIO Properties Limited to execute third party legal mortgage in favour of Diamond Bank Plc, over the said property as a security for the facility availed them by the bank and that SIO Properties Limited, by a letter and a board resolution affirmed the said covenant to the bank.

Mr Shambe averred further that it was upon a duly executed agreement that the banK granted the Chief Sonny Odogwu and the two companies the loan in form of a bridge finance to the said N26, 229,943,035.22. He added that he verily believed that the defendants are insolvent, otherwise bankrupt and unable to meet their financial obligation.‬

The bank in its originating summons is seeking an order of the court entering judgment in the sum of N26, 229,943, 035.22, jointly or severely against the first to third defendants, being the outstanding sum as at September 30, 2014, advanced by the bank for the defendants.‬

The bank want the court to also direct Leadway Trustees Limited to surrender all title documents in its custody in relation to the said property. However, neither Chief Sunny Odogwu nor any of his companies have filed any defence or objection to the suit. But the sixth defendant, the Leadway Trustees Limited, in objection to the order filed before the court by Mr Jide Bodede is urging the court to discharge the ordeer on three grounds.

According to Mr Bodede the said order must be discharged or vacated, these reasons, includes premature and incompetent of the substantive suit, and that the property in question is not in danger of alienation or dissipation; and that there is no matter of urgency for which the order was obtained.‬

Leadway Trustess Limited, in an affidavit in support of motion to discharge the Order deposed to by Oliver Obi, a manager in the company, averred that the bank was in breach of the provisions of the security trust deed, as purported termination of the appointment of sixth defendant and their removal as security trustee by the bank was not done in compliance with the terms and conditions of the said deed.‬

Mr Obi also averred that the Leadway Trustees was not against the enforcement of the security by the plaintiff and is not against the foreclosure of the mortgaged property but the bank did not give the company any instruction or authorization to enforce the security against the Chief Odogwu and his two companies who are first, second and third defendants in this suit.