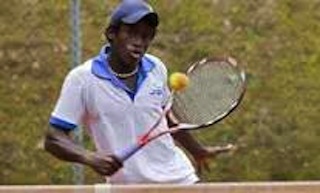 Enosoregbe, who had a fantastic campaign, defeated another hard-hitting player, Emmanuel Idoko, 6-1, 6-4 to further consolidate on his number one rating in the country.

The Dala Hard Court 2013 winner had complained about the harshness of the weather prior to the game and hoped that he would cope with the level of humidity, especially with his opponent being another good player.

However, the former Holland trainee ensured that he came out tops in the match which also lived up to its billing as one of the classics of the tournament.

“I am very happy and excited to have won here. It leaves me strong going to Kano where I also have a title to defend this new week. I have said this before and I must repeat it again. If we can always move around this way(from Governor’s Cup- NPA Open- Dala Hard Court – Tennis Masters), our players will be better for it.

“It is really a smooth period for our tennis and I honestly want to appreciate the sponsors for coming to our aid by providing us with a tournament to get ranking points and also make some money. We, however, want them to review the prize money against next edition, ” the Davis Cup player told our correspondent after the pulsating encounter.

Agugbom also defeated arguably the player of the tournament, Osareimen Airhunwunde, 2-6, 6-2, 6-3 in an unprecedented final pairing.
The former CBN Open Women’s Singles winner displayed her wealth of experience in her defeat of the fragile looking Airhunwunde to cart home the giant winners trophy and the N300,000 prize money.

He said: “I was very pleased to see Osareimen (Airhunwunde) play the final match of the Women’s Singles, she played really well and would have defeated her opponent but for her inexperience.

“Honestly, we are most grateful to our sponsors for giving us such an entertaining tournament. We believe that the youngsters who have emerged from this Championship will maintain the tempo in subsequent events.”