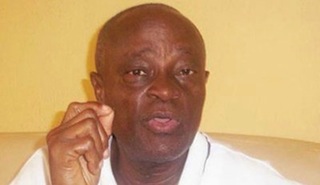 A former Minister for Works, Senator Adeseye Ogunlewe, on Sunday said the PDP would provide the peoples’ governorship candidate for Lagos State on December 8.

Ogunlewe, who is member of the Lagos PDP Elders Council, said this at a news conference ahead of its governorship primaries slated for Monday.

Ogunlewe said that the “APC has shown us the way.

“The APC picked a chartered accountant and a Christian as its candidate from Lagos-East Senatorial zone.

“The emergence of Ambode followed agitation for a Christian governor and also by Lagos-East that it was their turn to produce the next governor of Lagos.

“The standard set for Lagos on the type of sophisticated professionals that any party should present makes it impossible for the PDP to go for less.

“We cannot go back to the days of Babylon where anything goes. We will come up with a candidate that the people of Lagos can vote for,’’ he said.

Ogunlewe urged the delegates to vote for a candidate that would wrest power from the APC in Lagos.

“The election is not for the party alone. Any party with victory in mind in a state like Lagos must present a candidate that is sellable.

“We must pick a candidate that people will have confidence in. We do not want to be arguing with voters,’’ he said.

He noted that politicking had changed in Nigeria and people now ask questions hence any party that does not think of the electorate would lose.

He assured the people that the party’s primaries would be free and fair to all the aspirants.

NAN reports that seven aspirants are seeking for the Lagos PDP governorship ticket.

Meanwhile, in a statement by its State Publicity Secretary, Mr Taofik Gani, the PDP wished all the aspirants good luck.

“We are expecting close to 900 delegates to participate in an elective process that we promise must be free, fair and credible.

“We will not give room for any hiccup as we know that Lagosians are hoping on us to take over governance from the ruling APC,” the statement said.

It noted that at the end of the process, the people of Lagos would find the party’s choice acceptable to them.

“We wish the aspirants the best of luck,” the statement said.

It‎ congratulated Mr Akinwunmi Ambode for emerging as the flag bearer of the APC.