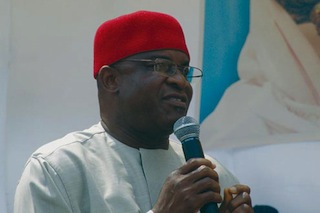 A correspondent of NAN who covered the primaries for Benue South Senatorial District, reported that the election was held at the Otukpo local government secretariat.

Announcing the results on Sunday in Otukpo, the Returning Officer for the election, Mr John Akume, said Mark scored 384 votes to pick the party’s ticket while his only rival, Mr Mike Onoja, withdrew from the race hours to its commencement.

At the Akume Atongo stadium, where the primaries for the Benue North East Senatorial seat held, Gov Gabriel Suswam polled 312 votes to emerge the winner.

NAN reports that the other contender for the seat, incumbent Sen. Barnabas Gemade, had withdrawn from the race a week earlier.

The returning officer for the election, Sen.Godwin Okpeh, therefore, declared him winner.

In a post election speech, Suswam thanked the people of the zone for their support during his tenure as governor and for nominating him as their flag bearer for the 2015 general elections.

According to the results, Tsumba scored 56 votes, Bula got 3 votes while Dzever scored 101 votes.

Speaking to newsmen after the contest, Mku commended the electoral panel for conducting a free and fair election and promised to work hard to ensure victory for the party in 2015.

He appealed to the losers to join him for the overall victory of the party at the general elections.

Mku is set to meet Sen George Akume, who is a consensus aspirant on the platform of the APC at the 2015 general elections.