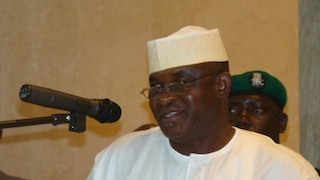 The Senate President, David Mark, on Saturday said free, fair and credible election was required in 2015 to safeguard and sustain democracy in Nigeria.

He said in spite of the various challenges in the country, “Nigerians have come to the inescapable conclusion that democracy is the way to go.”

He expressed satisfaction with the orderly conduct of the election and urged his people to sustain such in the 2015 elections.

According to him, I always want to lead by example. You can see from the conduct of my people here that my constituency is most peaceful.

“You cannot find us quarrelling or creating an atmosphere of disaffection because we do things in a dignified manner.

“We believe in justice, equity and fair play. Above all, we allow the will of God and the will of the people to prevail.

“For us, the people are the kings and we act in tandem with their wishes and aspirations,” Mark said.

The senate president urged politicians to abide by laid down rules and wishes of the electorate to avoid acrimony in the polity.